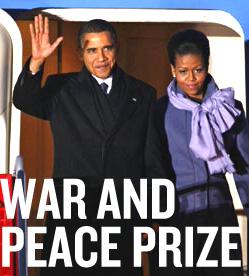 We all know the President is a busy man, but it’s not unreasonable to expect a trip to Oslo to pick up a Nobel Peace Prize to rank high on the agenda. Whilst in Norway, Obama is scheduled to meet the Norwegian prime minister and royal family before receiving his medal and delivering his main speech at a banquet tonight.

Unfortunately, the President’s perceived snub in cutting his visit short has had Norwegian tempers flaring. The Guardian reports: “The White House has cancelled many of the events peace prize laureates traditionally submit to, including a dinner with the Norwegian Nobel committee, a press conference, a television interview, appearances at a children’s event promoting peace and a music concert, as well as a visit to an exhibition in his honour at the Nobel peace centre.”

Most distressing for Norwegians though, Obama has turned down a lunch invitation with King Harald, which seems to have been taken as an unforgivable insult. “Of all the things he is cancelling, I think the worst is cancelling the lunch with the king,” Siv Jensen, the leader of the populist Progress party, told Norwegian tabloid VG. “This is a central part of our government system. He should respect the monarchy.”

The Nobel committee, on the other hand, has denied that there is an issue. We can’t help but wonder if perhaps they are a little relieved by the limited number opportunities for public scrutiny into the logic behind awarding a peace prize to someone who, as yet, has no major accomplishments in international relations to his name.

“We always knew that there were too many events in the programme. Obama has to govern the US and we were told early on that he could not commit to all of them,” said Geir Lundestad, secretary of the committee.

Well, he does have a war to be getting on with after all.