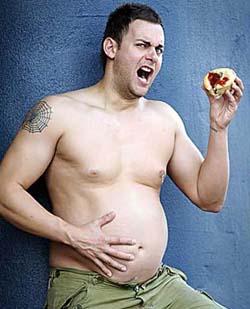 When a stunt nearly becomes a death bed.

Paul James a personal trainer from Australia wanted to see what his cliental went through when he had them join him. To that end he decided to become just as fat as them if not even fatter to the point when he decided enough was enough and it was time to lose the weight- the weight refused to come off at all.
Reports news.com.au:

IT has taken four months of intensive work and more willpower than he thought he had, but personal trainer and former underwear model Paul James is finally almost back to his original weight.

Paul “PJ” from Melbourne stopped exercising and ate junk food to balloon from 80kg to 120kg in five months so that he could better understand his obese clients.
But it wasn’t always this is easy…

The most difficult period was the first three months of trying to lose the weight, when he was doing everything right and nothing was changing.

He was also grappling with a fatty food habit, which took six weeks to subside.

“I was pretty worried for a while. I really thought I had gone too far and I would be stuck with the weight forever,” he said.

“It was hard to stay motivated when I wasn’t seeing any results but once the weight started going it became easy.”

Proving that will power does in fact go a long way Paul James is now getting ready for a photo cover shoot and of course has taken to the task of trying to find a distributer to the film he was making whilst battling the bulge. Now there’s an experiment that can have a great trade off- assuming you don’t get stuck on the other side.

Paul James almost back to his original weight. – News.com.au