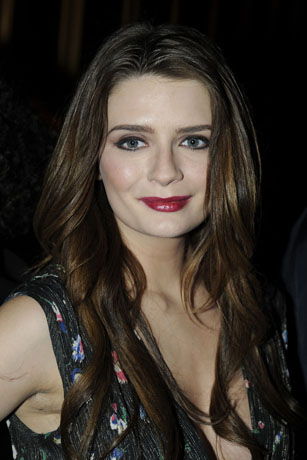 I found myself in the Standard Grill at 12am last night, drinking the standard ketel one rocks two slices of lime. As I stood outside to smoke a cigarette, I looked upwards, to the penthouse floor that now houses the much touted “Boom Boom Room.” My night had begun at the entrance to the Standard foyer, on the red carpet.

I had waited in the abominable cold for the arrivals to the DVD launch party (sponsored by Maestro Dobel Tequila, HSBC Bank and Mercedes) of “Valentino: The Last Emperor,” a documentary filmed in resignation, and anticipation, of the designer’s final opus.  The dark shroud of Valentino’s farewell, announced in 2008 at the celebration’s culmination, continually hangs in the background for those viewers familiar with the story.  The sale of the company to Permira, a European equity fund, in 2007, fatefully occurs during filming, and cameras capture the strained relationship between fashion and financier, or beauty and dispassionate calculation.  A surreal battle, never resolved but artfully waged, commences.

I was here only four hours ago, standing on the red carpet in anticipation of the designer’s arrival. I was certainly one among few. Eager voices rose in expectation of Madonna’s entrance, whose novio Jesus was due to DJ at 11:30. Hugh Jackman was questioned about everything, from Oscar hosts to family life, but not, unfortunately, on the man of the evening; no, dears, not Jesus, VALENTINO!

Of course, it is not the fault of the carpet arrivals but of the questioners, whose desire for the salacious gossip inevitably feeds us all over morning coffee, but fails to capture the moment, the raison d’etre (cliché, I know, but fitting) that we are all here. I wanted to see Valentino.  I wanted the chance to speak to the man whose vision and unerring pursuit of perfection lasted, not 15 minutes, but 50 years.

Go to pg 2 for more amazing photos courtesy of PMC.