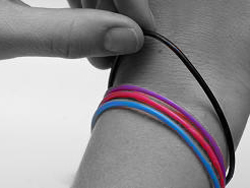 Outrage in the school yard.

Kids these days are quite clearly depraved. The “newest” fad for UK schoolchildren is to sport ‘shag bands’, a bunch of brightly colored plastic bracelets that, if snapped, represent varying sexual acts (pink = flash your breasts, black = full sex, and so on) that must then be performed by the snappee on the snapper. Horrifying, isn’t it?
Well, maybe, from the outside, yes. But what seems to have gone over the heads of the general outraged public is that these things have been around for a long time. They just happen to be having a bit of a resurgence, like leggings and asymmetric dresses. We had shag bands when I was at school, although if memory serves they were then called ‘shag bangles’, so it’s easy to see how the connection was missed by the rule-makers who have got their knickers in a serious twist over this “new” threat to childhood innocence. However, the thing is, unless I was exceptionally naive as a twelve-year-old, shag bangles were never anything more than a fashion statement when we wore them, and I seriously doubt they are anything more than that now. I certainly never slept with anyone who snapped one of mine, and I don’t recall anyone else who did either. If only people would credit children with a little common sense.
The schoolyard has long been the domain of dangerous games. Some require intervention; others don’t. A friend of mine ended up in hospital after playing the Fainting Game a little too enthusiastically, and we were forbidden from playing British Bulldog after one girl split her head open running headlong into a wall, but some colored bracelets are not an indicator of the demise of morality and reason in our children. Any idiot can see that enforcing a ban will only make them more desirable.
The most sensible response came from one teacher who had the bright idea of wearing them herself instead of just putting them in her desk. The pupils in the upper school ceased wearing them immediately. It’s comforting to know that at least one person in the teaching profession has a passable understanding of how kids’ minds work.
Would you let your daughter wear a “shag band”? – Times online
SHARE
Facebook
Twitter