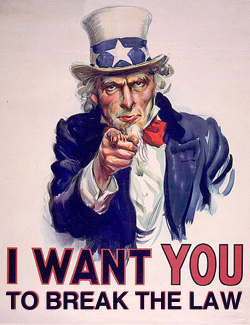 Bernard Kerik becomes the first NYPD commissioner in over 100 years to admit to committing a felony.

We here at Scallywag are less dedicated to breaking the news to you than we are to showing our utter disgust for it. This week, Bernard Kerik, NYPD Commissioner, admitted to 8 of 15 felony-level crimes which basically amounted to the fact that Kerik struck a deal with a mob associate and then kept the cops off said associate’s tail. Sadly, this doesn’t seem all that shocking or out of the ordinary to anyone who holds no illusions about the role of public servants.

This does, however, cast even more doubt on the credibility of the people appointed to keep the rest of us in line. Legislators are being bought by lobbyists, certain cops on the beat bribed by crime associates, and now the highest ranking officer in New York City is going to jail for upwards of two years for striking deals with the people he is supposed to be trying to put behind bars. What are we supposed to think when we are told to play by the rules but the referees arent even calling a fair game? Then take a look at the billionaire owners of bankrupt automotive companies and try to explain that.

It seems less and less true that America is the land where hardwork and smarts will shoot you to the top. Success seems more and more to revolve around the deals you cut, no matter how shady or unethical they may be. Maybe it’s just the human condition to want to finagle yourself into a winner’s situation, and if  it is we don’t mind except for the part about speaking heads telling everyone to keep clean.

Jumping the queue has always been a great idea assuming you’ve got stamina- never mind the sign that says to wait behind the line.