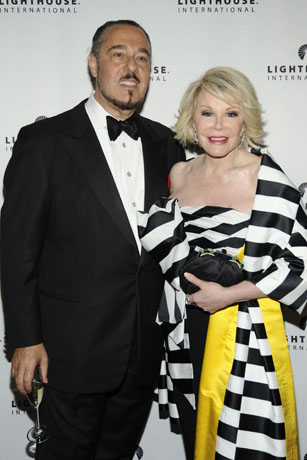 I bet you thought that even slightly high-profile marriages never last, that modern-day Hollywood composers are tech-savvy and that Joan Rivers is always snarky. I certainly did. And at Lighthouse International’s annual gala LightYears, I was proved wrong. Lighthouse, which provides vision preservation, rehabilitation and loss prevention services to people of all ages, held its 104th black-tie fundraiser at the Plaza Hotel (the organization has been around since 1905). Every year, LightYears salutes the arts by recognizing visionaries in the fields of music, design, film and fashion.

Among the honorees were husband-wife duo Marc Rosen and Arlene Dahl. Rosen, who has been involved with Lighthouse for ten years, is a renowned cosmetic packaging designer who has worked with Karl Lagerfeld, Elizabeth Arden, and Celine Dion, to name a few; Dahl, who has been involved with the organization for over three decades, is an actress who starred in the films Journey to the Center of the Earth, Reign of Terror, and Three Little Words. While Dahl’s romantic history isn’t exactly straightforward, she and Rosen just recently celebrated 25 years of marriage (hey – if Tudors has taught me anything it’s that the sixth time’s the charm). The two have an extremely fun, quirky and loving dynamic, and even amongst a frenzy of attention, it was obvious how proud they were that the other was being recognized for their accomplishments by an organization with which the both of them are deeply involved.

The honoree for interior design Mica Ertegün, was the model of class, humbleness and understated elegance – something she infuses in her designs for her firm MAC II. Aside from residential projects, she has designed for a number of banks as well as for the Carlyle Hotel.

I also got a chance to chat with the final honoree, composer Marvin Hamlisch, who joked that he doesn’t read any online magazines since he doesn’t know how to use the internet. Though he didn’t chat for long, he did manage to convey his amazement over Intel’s newest gadget The Reader. Intel worked with many organizations including Lighthouse to develop this portable device that reads text aloud. Guests of the event got a chance to test out the nifty tool during cocktail hour.

After the presentation of awards and a short intermission for dinner, the focus of the evening turned to the auction, which was hosted by the hilarious Joan Rivers. Contrary to stereotype, Rivers was extremely genuine and nice. She told me about her ten year involvement with Lighthouse after her mother’s vision deteriorated. She was glad to be a part of something that was more substance and “not as sexy.” Though it has to be said that it wasn’t for lack of trying – much of the room was sprinkled with plastic and collagen-enhanced lips. Rivers did entertain the crowd and successfully raised a lot of funds for the organization.