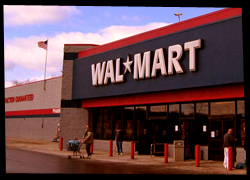 When the mob finally learns to behave itself…

If you’ve looked out the window today you will realize that the whole world has gone shopping, even those without money (otherwise known as faux shopping…). Seeing that shopping is a national pastime, obsession, and a rite of passage, preliminary observations by some of our writers have noticed contained boorish behavior and to some degree moments of surreal serenity as shoppers opted not to trample over each other and security guards this year in their rush to immortalize themselves with trinkets. (Yummy we love trinkets!).
Reports the NY Times who also sent out their writers to report on possible shopper mischief (alas you were relatively well behaved this year…)
In that sense, the added security seemed to pay off. Yet, many stores were chaotic, and shoppers jostled to get at the deeply discounted merchandise.
Okay so you didn’t entirely behave yourselves, but we’d rather have jostling than trampling, right kids?
At the Valley Stream Wal-Mart,- All was calm but for the usual squabbles and shouts of “He cut the line!” Wal-Mart employees doled out water, chips and crackers.
Oh well- heathens will be heathens and our guess it’s only human nature to try and get one over another- right?
Continues the Times-

... but when another woman arrived late and tried to get past her, shopping carts and egos clashed.

But perhaps ‘Toys “R” Us’ Ceo and Chairman Gerald L.Storch can some it all up for us-

“I heard a lot of comments that customers were actually in a very good mood,” Gerald L. Storch, chairman and chief executive of Toys ”R” Us, said Friday. “Some of it may reflect just a kind of consumer exhaustion with bad news. Maybe it’s time to have some fun.”

Yes Gerald we agree with you – let’s all have some fun and may the mob be very merry!