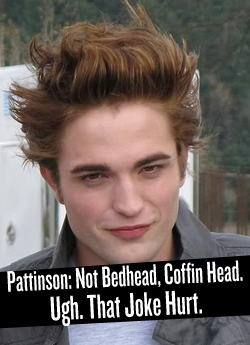 Poor old Robert Pattinson. He’s learning what life is like when you can’t go out in the day time for fear of being recognized for what you really are – the world’s favorite teenage vampire.

No, really, I actually do feel sorry for him. I mean, it’s not like he knew what he was getting himself into with Twilight. No one had even heard of the books when he signed up for a three picture deal.

As the good, old-fashioned, only-mildly-obsessed superfans count down the days till the release of New Moon, the sequel to the box-office smash hit (as if you didn’t already know), there is a whole other breed of superfan surfacing. They are more obsessive, infinitely more frightening, and they are gathering. Though forgivable as the assumption is to make, it is not just hyper-hormonal teenage girls who are lusting after Edward Cullen, Pattinson’s charater in Twilight (again, feel free to pretend you didn’t know). There are plenty of grown women whose loins also throb for him. 38-year-old fan convention attendee Claire says “Edward has spoiled it for all the other guys. He’s set the bar too high,” while 35-year-old Kendra called him the “perfect man.”

Oddly, though, when Pattinson played Cedric Diggory in Harry Potter and the Goblet of Fire no one batted an eyelid. He was the same guy, equally good looking, and yet no one swooned and fell in love with him until he became a (vegetarian) predator. This is why I feel just a little bit sympathetic towards the soft-spoken 23-year-old who cannot go outside for fear of the girls outside his hotel room chanting his name: they are not really chanting for him. They want Edward. And I would imagine that would be a little strange to deal with.

Right. Now that we’ve acknowledged that it’s a mildly odd situation to be in, the five minutes of sympathy are over, and it’s time to stop moaning about being a multi-million-grossing movie star with women falling at your feet.