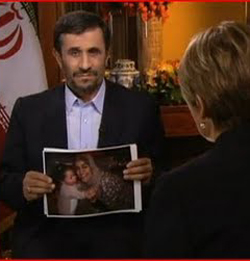 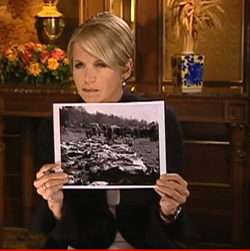 Ahmadinejad and Katie Couric each go for the jugular.

There has to be something a little sinister, even cynical when a tv interview between the head of a state and that of a media conglomerate start pulling out pictures of dead people to try and justify political point of views. The effect is to disarm you and corner you into some baloney point of view which the better half of you knows is false but because pictures are being waved you don’t know what to think. It’s like a magician who seemingly slices someone in half with that person smiling still and you wondering something’s not quite adding up….

That said let’s take you to the TV drama called “I like to score points,” starring political zealot – Ahmadinejad, president of Iran and media zealot – Katie Couric (when we say media zealot we mean anyone who overzealously tries to explain, purport, re affirm the prevailing espoused doctrine )

DURING an interview the two did with each other’s head in and by extension ours.

It went something like this, are you ready to be panhandled?

Media Zealot: I am holding a picture of Neda Soltan a young woman who the Iranian authoirities shot dead during the recent uprising in Iran. You are effectively a bad person.

Political Zealot: Very interesting. Hey can I show you a picture too?

Media Zealot: (a touch suspicious) Hmm. Sure why not?

Media Zealot: Ok, so what gives?

Political Zealot: Oh didn’t you know? She was knifed to death by a neo nazi in a German court. You know why you didn’t know about her? It’s because you are too busy coming after me and distorting world news.

Media Zealot: Are you trying to disarm me?

Political Zealot: One could say the same of you.

(And then a little later).

Media Zealot: Oh before I go, I’d like to show you a picture I just found in my wallet.

Media Zealot: No- It’s of people in Nazi Germany during the holocaust that you denied ever happened? Tell me is this picture fake?

Political Zealot: Something is not adding up?

Media Zealot: It’s nothing personal, I’m just manipulating the line of discussion and making sure I draw as little attention to America’s own tyrannical behavior.

Political Zealot: You know we should go for a drink?

Media Zealot: Not until my ratings go up bitch…

The moral of the story; All animals are equal. The Animal Farm, George Orwell. 1945.

Is there any chance that IRAN’S re-elected president Mahmoud Ahmadinejad and North Korea’s fun dictator – Kim Jong 11 will turn up at Michael’s memorial?

Tehran: Should I be surprised that a dictator wins in a ‘landslide’ vote?