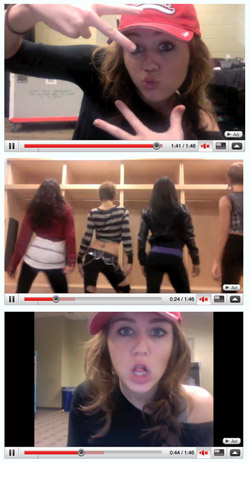 Miley Cyrus, that ‘hot young thang’ has just given the world a ‘hot new rap’ that we are sure you are dying to try to get your head round. That said we decided to re-produce the starlet’s latest efforts which until recently could be had on twitter, that is until Miley decided to pull it (collective groan).

Without further ado let’s be entertained…

yeah the rumors are true, I deleted my twitter, (hah)

Can you believe it, I got to two million,

And I said Adios, and had to say goodbye,

and this little rap is to tell my fans why.

No it wasn’t because my friend told me to,

you all know very well what you say I don’t do,

The reasons were simple, I started tweeting bout pimples,

Yeah you write what you’re doing but who really cares,

if I’m playing with my what or just doin’ my hair,

Those lame gossip sites take it and they make it news.

I ain’t livin’ for tabloids, no, I’m living for me.

No more emo quotes and fake feuds with Demi,

yeah I’m done with all of that, and the truth is I’m too busy.

And I really like looking at Katy Perry and Brittney.

I might have some withdrawls, yeah I was a little obsessed,

But I’m peacin’ out and I’m leavin’ with this (hah) goodbye.

First of all, why? Second of all, you need to finish your composition class before you try to write ANYTHING ever again. Third, you stopped tweeting because you are too busy, but we guess writing a devastatingly bad rap and shooting an equally embarrassing video fell right into your schedule?

Pre-Internet era, publishing something took a lot of time, money, and personal investment. However, it seems that with the advent of instant publication, the floodgates were opened and all the F-List YouTube celebrities came pouring out. And the D and C-Listers were not far behind. Things that are passing for media (YouTube videos, TwitPics, personal blogs) now are so far beyond horrible that they have officially entered into the category of medieval torture devices, designed specifically to inflict as much searing (mental) pain as possible.

To tie up some loose ends, that video was horrible because:

A) You shot it in a bathroom

B) You had tramp-stamped backup dancers in thirty seconds of your video that disappeared leaving us only with you and your flashdance sweatshirt (or was that before your time?) and goofy red hat

D) You rapped about the internet, passé celebrities (Dane Cook? really?), and (confusingly) about how you never had anything good to say anyways.

All things considered, writing this review of your video probably wasted about as much time as you did filming it, but  hopefully its viewing is a great deal less painful.

Pain comes in all shapes and sizes, and in Miley’s case it is the shape of a YouTube video and the size of a small star…