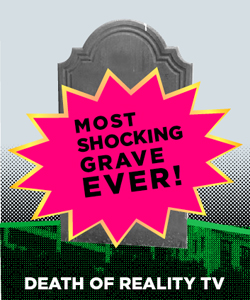 When people are starting to get over scripted realities…

With the fall season under way the networks are starting to feel the dragging of feet when it comes to people coming to their latest franchise offerings and that of course is on top of the latest drag on big ticket shows which have started to lose their luster on audiences.

According to Variety magazine :

Despite strong ratings for new scripted fare this fall, overall numbers are down for the nets. And part of that is because primetime’s reality show pack is aging, and just about all of them are well past their peak.

The biggest loser so far – ‘Dancing with the stars.’

The fall out could be heavy because unlike other shows with active script writers reality shows are syndicated franchises that come with lots of bells and whistles that involve a lot of scheduling around (in other words the networks load the reality shows up front and then pepper you with other things which you really don’t care about but might watch from time to time like cultural programs or even the news…).

The big unanswered question of why reality shows have started to cross their peak has yet to really be answered and although the networks are still holding on hopes and are willing to tweak bells and whistles we think the cultural appetite for nausea and public nuisance behavior has had its run and although initially it was kind of fun to have grandma raped on TV, (metaphorically speaking) it kind of eventually got old and people started realizing that this really can’t be reality behavior when the same outlandish behavior and absurd excesses kept happening on one reality show after the other.

Part of the ratings erosion might be the fact that, critics argue, reality shows are all starting to look alike, whether it’s the tremendous number of studio-based talent contests with three judges or the elimination competitions that promise the “most shocking (blank) ever!”

Reality shows are starting to look alike? Is that true? Reality morphing into each other? How did that happen, is that possible?

What about the part that people need to challenge each other? Is that for real? Surely the American audience is more passive than what producers make them out to be?

And finally this zinger from Variety: Of Reality shows-

These are staples of network TV. Without them, network TV would be dead.

Can we all let you in a secret? Network TV is already dead but they just don’t know it yet. In the mean time, we’re sure you’re just tossing and turning in bed trying to figure out who’s going to marry the next millionaire of Nebraska.

Reality TV: Too much of a good thing?