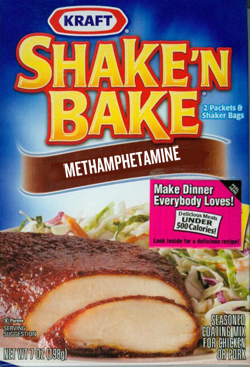 Getting high in the basement.

Yesterday, it was learning how to smoke crack. Today, it’s how to make crystal meth on the run: you know, the type of things you can indulge in (in your spare time). According to AP , meth-making used to require access to an underground lab but thankfully for you, fun can now be had once again by simply coming across the following :

2) a few handfuls of cold pills and

What the noxious chemicals include probably wouldn’t be so hard to figure out for those of you bent on trips to the moon and psych ward. But it gets better-

But now drug users are making their own meth in small batches using a faster, cheaper and much simpler method with ingredients that can be carried in a knapsack and mixed on the run. The “shake-and-bake” approach has become popular because it requires a relatively small number of pills of the decongestant pseudoephedrine — an amount easily obtained under even the toughest anti-meth laws that have been adopted across the nation to restrict large purchases of some cold medication.

Shaking and baking on the run: wow, that kind of sounds convenient, and we do like the knapsack bit.

But before you start your new habit, like most drugs this too comes with a warning. Let’s read it together-

Unpleasant risks to contend with

Using the new formula, batches of meth are much smaller but just as dangerous as the old system, which sometimes produces powerful explosions, touches off intense fires and releases drug ingredients that must be handled as toxic waste.

“If there is any oxygen at all in the bottle, it has a propensity to make a giant fireball,” said Sgt. Jason Clark of the Missouri State Highway Patrol’s Division of Drug and Crime Control. “You’re not dealing with rocket scientists here anyway. If they get unlucky at all, it can have a very devastating reaction.”

A tad inconvenient but maybe losing an eye or a leg might still might be worth it. Let’s read on, though we know you’re all itching to make a run to the nearest Duane Reade store…

“Every meth recipe is dangerous, but in this one, if you don’t shake it just right, you can build up too much pressure, and the container can pop,”

Yickie, let’s ignore this bit. It gets better here-

A typical meth lab would normally take days to generate a full-size batch of meth, which would require a heat source and dozens, maybe hundreds, of boxes of cold pills.

But because the new method uses far less pseudoephedrine, small-time users are able to make the drug in spite of a federal law that bars customers from buying more than 9 grams — roughly 300 pills — a month.

Crystal Meth– shouldn’t you be blowing your brain away too? Available down in your nearest makeshift basement laboratory…discretion advised.