When a friend suggest I check out the ‘dirty’ rooms at the latest Tate Modern exhibition Pop Life I must admit, I became a little intrigued.

The exhibition centers around Andy Warhol’s provocative quote “good business is the best art” and brings together a bunch of artists that have embraced the media game and the commerce of art. Warhol, of course, was no stranger to whoring himself out to the press, he knew only too well how to work his self-image and his art to gain mass exposure.

Whatever your view this exhibition clearly displays the various ways artists have cultivated their artistic personas and created their very own signature brands. In fact, this exhibition could have easily been called ‘Me, Myself and I’ due to the flagrant amount of self-immortalization on display.

Alongside Warhol’s Pop Icons and Gem prints you can find works by the likes of Keith Haring, Damien Hirst, Jeff Koons, Martin Kippenberger and Takashi Murakami. By harnessing the power of the celebrity system these artists have reached beyond the inner sanctum of the art world to engage audiences both inside and outside the gallery. From Damien Hirst’s (aka Britain’s richest living artist) Golden Calf to Keith Haring’s Pop Shop room (see above) – the works on show are far from subtle. Sometimes brash, sometimes challenging the by-line for this exhibition could be ‘there is no such thing as bad publicity.’ 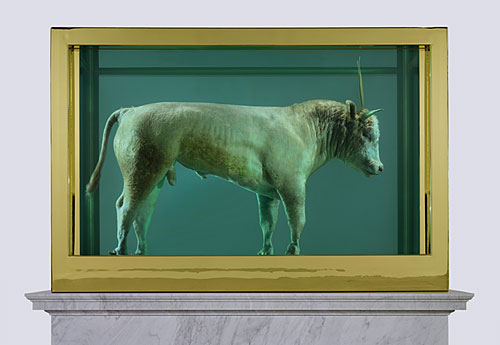 While Keith Haring and Takashi Murakami took the mass merchandising route the likes of Jeff Koons and Andrea Fraser blatantly used sex to provoke media and public opinion. Hence the reference to the ‘dirty rooms’ with cocks and copulation aplenty.

Pop Life looks at the commercialization; some might say degradation, of art over the past 30 years. It’s no coincidence that the show is doing brisk business bringing all walks of life through those Tate Modern doors. Ironically, however, the idea of making art accessible to the masses doesn’t extend to the exhibition’s photography policy.

Pop Life, Art in a Material World is on at the Tate Modern, Bankside, London until 17th January 2010

Pop Life: Art in a Material World will travel to the Hamburger Kunsthalle from 6 February – 9 May 2010 and then to the National Gallery of Canada, Ottawa from 11 June – 19 September 2010.