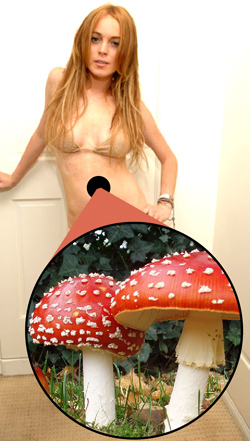 Another day, another story on La Lohan. At first, it was fun to watch this media brat crash and burn. But slowly, it’s becoming more painful to watch. Not only did her fashion debut in Paris fail and earn her snickers and eye-rolling, she has her two embarrassing parents who cannot seem to keep their mouths shut and stay away from the media.

Her “doting” father recently told the press, “I’m going to get her off the prescription drugs that she’s on. You know why Lindsay’s not acting in feature films right now? Because she can’t,” he said. “Because the girl with all the talent is hidden and buried deep inside this fungus that’s grown because of the prescription drugs. She can’t be herself. When you hug her she’s like, vacant inside. When she kisses or holds me I get chills, and not in a good way-in a bad way.” Yes, dad, that’s the best way to get your baby to stop doing drugs. Tell the whole world that she is on drugs and that she’s empty inside minus her fungus.

And of course Dina Lohan had to get in on the story by stating, “I have no idea what he is talking about. I can’t comment on everything my ex says. The critics can say whatever they want, but Lindsay is a genius.” Woman, when everything your daughter is doing isn’t going well, and she really looks and sounds like (via Twitter) that she isn’t happy, maybe you should take a step back from acting like a defensive mommy bear, and actually be a humane mom and really dig deep and see beyond the facade to see if she’s really happy.

With so many child actors out there who are turning out to be alright, it’s obvious to see why Lindsay is such a train wreck. With parents like these, who needs seedy friends from the hood who offer you drugs and fake happiness?

Drama student hangs her self hours after telling friends she had...

Can You File a Lawsuit Against a Nurse for Malpractice?