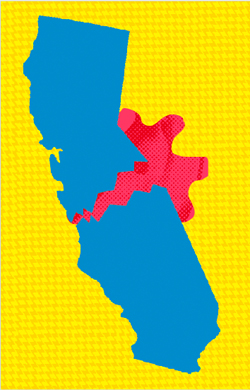 Out of the Guardian comes a sobering report on the current state of affairs in California which has now in some perverse way begun to resemble many of the third world nations that so many people who now live there had originally fled from.

On the surface California “…is the Golden State: a playground of the rich and famous with perfect weather. It symbolizes a lifestyle of sunshine, swimming pools and the Hollywood dream factory.”

Of course what the report neglects to mention is that this idyllic lifestyle in predominant display night and day is unfortunately only available to a very select few, and when we say few we generally mean Hollywood stars and their handlers and the handful of professionals who have still managed to maintain their sanity and some sort of decent paycheck. The rest of you get to live in hell:

Its state staff are being paid in IOUs, unemployment is at its highest in 70 years, and teachers are on hunger strike.

Hunger strike? Kidding right? Actually the news get worse. Please everybody put on your safety belts…

California is like a patient on life support. At the start of summer the state government was so deeply in debt that it began to issue IOUs instead of wages. Its unemployment rate has soared to more than 12%, the highest figure in 70 years. Desperate to pay off a crippling budget deficit, California is slashing spending in education and healthcare, laying off vast numbers of workers and forcing others to take unpaid leave. In a state made up of sprawling suburbs the collapse of the housing bubble has impoverished millions and kicked tens of thousands of families out of their homes.

Are you guys getting the feeling that you are driving through Honduras instead of California? Could it have something to do with the continual ‘Mickey Mouse’ bombardment in the media world that so many of us are suddenly caught off guard and that it has taken a foreign media company (the English) who were probably thinking when they first set out to visit California that they were going on a holiday but suddenly realized once they got out of the airport that in fact what they were walking around in turned out to be an expanded version of ‘Skid row city?’

Continues the report (which, if it hadn’t made you want to laugh sadistically before, probably will now):

The scene is reminiscent of the fallout from Hurricane Katrina, as crowds of impoverished citizens stand or lie aimlessly on the hot tarmac of the centre’s car park. It is 10am, and most have already been here for hours. They have come for free healthcare: a traveling medical and dental clinic has set up shop in the Forum (which usually hosts rock concerts) and thousands of the poor, the uninsured and the down-on-their-luck have driven for miles to be here.

Tasteful? How about this?

The queue began forming at 1am. By 4am, the 1,500 spaces were already full and people were being turned away.

Is that the same queue for Mickey Mouse world too?

Want more? Sure you do? You just arrived in California, there’s plenty of time to visit Mickey Mouse, but first a quick word from your sponsor.

In order to pass its state budget, California’s government has had to agree to a deal that cuts billions of dollars from education and sacks 60,000 state employees. Some teachers have launched a hunger strike in protest. California’s education system has become so poor so quickly that it is now effectively failing its future workforce. The percentage of 19-year-olds at college in the state dropped from 43% to 30% between 1996 and 2004, one of the highest falls ever recorded for any developed world economy. California’s schools are ranked 47th out of 50 in the nation. Its government-issued bonds have been ranked just above “junk”.

Really kids, what did you want him to say? “No it’s all dead, you might as well move back to Honduras cause at least there you can still get healthcare and a tan on a good day…”

From there the article offers a wonderful read as to how this mess came about and one can see the bursting of Silicon Valley, the mortgage bubble and unresolved debt crises has amongst other reasons turned this pioneer’s dream into a Banana nightmare.

But one thing is for certain, you can still find Paris Hilton telling you how wonderful life is and cute bimbos like Jessica Simpson crying that when your little dog goes missing life can really become a bitch. We can also add when your sanity goes life becomes a bitch too, but we’ll save that for Mickey Mouse…