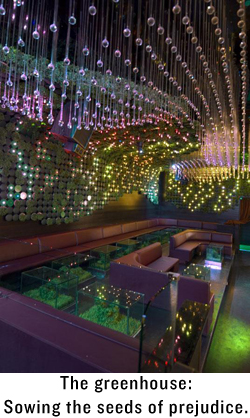 Is it because I’m black or because I weigh 300 pounds?

Looks like the tension in race relations have reignited in the city. A new lawsuit on the blocks has plaintiffs suing the downtown private club the Greenhouse for denying up to 175 people who were on a guestlist for African American fiction writer Teri Woods celebratory party. Of course there wasn’t much of a celebration when Woods found most of her entourage being denied entry into the venue.

Club owner Barry Mullineaux declined to discuss what had happened to Woods’ party beyond calling charges of racism “all pretty much bogus.”

“Everybody looking at me like this ur people Barry???” read a text message from owner Barry Mullineaux. “I couldn’t let in 300lb girls.”

Of course, Barry letting in 300 lb girls is a no no in any part of the world. We understand the cool factor and cool quotient which is ever so valuable… too valuable…

“They left all of my friends and family standing outside,” she said. “I had really serious people out there: lawyers, doctors and people in the entertainment industry.

Are we now to believe all 175 guests some of them respectful members of society were turned away for being overtly fat as well? Or are there some other compelling reasons that aren’t exactly being divulged here?

Robinson, the sister of rapper Queen Pen, said, “When I asked the doorman what was the problem, he just looked past us like we didn’t exist.”

In any event it promises to be a very interesting session in court as a new chapter in race relations is brought to the table.

Going to nightclubs can be loads of fun, just make sure you are not fat and preferably politically cool, whatever cool actually means…race, gender and sexual orientation aside…
Read more: