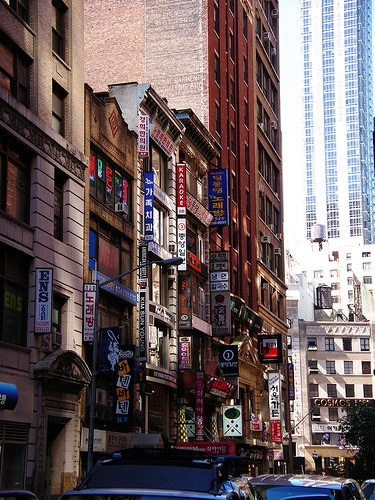 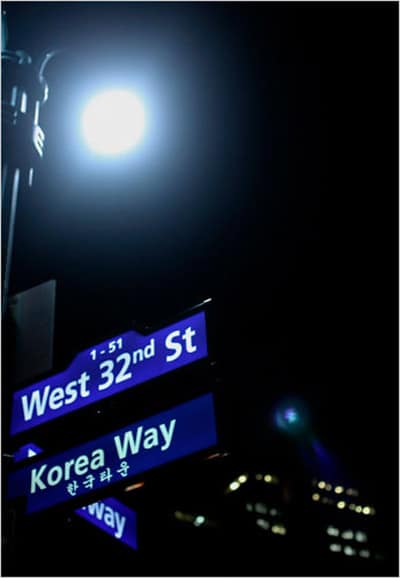 Picture this: the steam, the hustle and the slanty eyes. Chanel stockings, Johnny Walker ice cubes and the fake designer handbags. Keep walking faster down the street, pass the noodle shop, the old woman hustling whatever, the busy neon lights, beggars, the drunk peeing at some store front window, never mind the teenagers from Queens doing the same thing and their limp Marlboro lights. Careful, don’t get run over , taxi drivers hustling, another one too, and the tall woman with her La Perla garter belt. Breathe it all in, and think you are in the heart of some sewer, but where you really is K town. K town short for Korea town, the greatest hustle south of Times square, open 24/7.

If you want the facts- there never was a grounded plan for this district (from 31st to 36th streets, 5th to 6th avenue) to be erected. Given the low rents and the high tourist foot traffic occurring due to the close propinquity of the Empire State Building and the Garment District, to name a few, it became an idyllic cocoon for the Korean population to nestle into. As a young girl my parents would come to this borough and all I would see where smiling fat Korean women, their husband chefs and the Korean bookstores my parents would take us to visit. Of course that was then and I’m not that six year old girl anymore, who I am is yet to be discovered but what am I suppose to discover when everything around me is a fast forward sleaze outlet?

To foreigners it may seem like an intriguing place to visit. But I know better. Most travel here with their sole Korean friend who show them the ways of eating bulgogi, bibimbap — the only two foods that everyone seems to introduce to Americans — and drinking shot after shot of soju. (An alcoholic drink that one can buy for $3 anywhere in Korea, yet $18 here). So far you think you’re having fun and you are but the truth is I know better…

Sure, the restaurants and the bookstore are still there – but did anyone notice the roaming alco’s that now call this place home or the girl with holes where her eyes are supposed to be? Walk past the nail salons, so many, so tacky but of course a girl has always got to look her best. Especially these girls. C’mon don’t pretend you don’t understand what I mean, that one, and the other one trickling like slinky cats out of brittle stoned hotels. They call them underground ‘room salons’ but anywhere north of Times Square they’re called a brothel.

Littered with women more than willing to bare their asses in return for some sugar daddies and their money. And yet here is the catch- Korea has always been known to foreigners as a conservative and well-mannered country, but these days that’s just a fairy tale for postcards. With women actually joining the prostitution ring without shame, and calling themselves the “10%” — an elite group of prostitutes who think very highly of themselves — this once frowned upon and secretive field of business has become hyped up and mainstream. Amazing? No just back to basics business.

It seems as though this once cultural revolutionary street is turning more into a locale where the Korean population are trying to dominate. It is not of a more welcoming spirit, but instead a secluded area in which foreigners cannot even penetrate the first layer of the town. With the rise of these “titans” all over New York City, it seems to be more of battle of the races. Although stereotypical, all the nail parlors and the dry cleaners seem to be of Korean descent, but you already knew that. Funny how a place that can come of as a public museum to outsiders, can light a dizzy cigarette and become a sleazy broad for hire.

With more and more immigrants surfing their way into America, this place could be a nest for them to fly home to. Once reserved for Koreans alike, the damn Chinese are now trying to push their way in to K-Town. Let’s not forget the Japanese who own St. Marks. Whether you like to admit it or not, us gregarious Asians seem to be shoving their way in It seems as though these foreign enclaves are becoming a battle of the races rather than a touristy attraction where people can come and be educated. But who needs education when you have illegal dishwashers, gun happy gamblers and the girls who go ga ga for these guys?