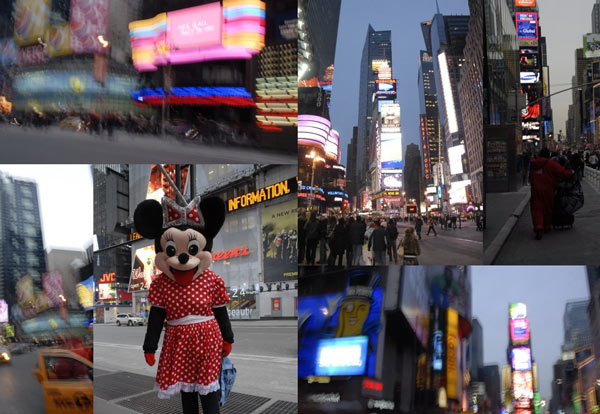 Time Square isn’t a square at all, but a triangle, with its two main avenues like a lady’s legs spread wide. Coming up in between her thighs is a large glowing billboard, a seemingly thousand foot tall Mercedes-Benz sign. This is one example of America at her current finest: being had by a foreign company in broad daylight.

Images like this leave those who knew Time Square before Disney Land’s invasion with a certain look in their eye, at once exhausted and traumatized. Their beloved Time Square is dead. The one that existed from the 1950’s through the early 1990’s, filled with drugs, live sex shows, pimps, whores and people of every class and color. It was, they reminisce, the only place a gay could really be a gay.

The Time Square this older generation knew grew out of what soldiers had witnessed overseas during WWII. Away from their American girls, these men had been to brothels and seen women in a plethora of positions. Returning to the United States on leave, they craved not only Europe’s acceptance, but also appreciation, of sexuality. Barely after the “The Big Kiss” graced the cover of LIFE magazine, the porn industry grew in Time Square with demand breeding supply and supply fueling demand. On their heels were the drug peddlers selling amphetamines, acid and eventually heroine to let them all down softly.

But there was more to Time Square back then than simply sex, drugs and rock n’ roll. It became a sort of sacred space for those who practiced the religion of self-expression in a time when street performers were not required to pay for a permit. It was a place where anything went and all were welcome as long as you were down with some kind of beast. And honest with those who worked the Square. After all, it wasn’t just pimps and hoes that walked the streets. Who do you think they catered to? None other than Rabbis, Wall Street brokers and Priests.

Time Square is different now. Though I am young, I am not so naïve to think otherwise. Though I do remember my first visit to the center of Manhattan when I was thirteen. Hanging my head out the window, I smiled and imagined at least a dozen photographers capturing my awe and delight. Frank Sinatra was singing in my ear and I was his date dressed in a red, satin gown, breaking through our roof and waving a glass of expensive Champagne in the air.

Now, as I take my first good look at Time Square since becoming a NYC resident in 2009, I am reminded of a painting I’ve tried to create all my life: bars of color in various widths and heights, intimately confronting each other inside the canvas’ frame. Time Square looks like this, a multi-colored, crowded and loud place where breathing room is a luxury.

As I wander around Time Square at three o’clock in the afternoon on a Friday, the endlessly streaming newsreel informs me that today is the coldest day of this winter’s season. I already knew this, though, because my pen’s ink keeps freezing. However, a frozen pen is a small price to pay in comparison to those who were here for New Years Eve, the second coldest day of this season. On that day, if you wanted to start off 2009 in Time Square, you had to first stand in a single file line (how long?) and empty out your bags for the NYPD in the name of freedom from terror.

Only then were you entitled to receive a gift from the companies that shut down the rest of the Time Square’s corporations for New Year’s Eve- yes; this holiday can be bought, too- a small tube of Nivea hand cream and a can of cold Pepsi to carbonate the New Year. After all, there’s nothing more we human beings are concerned with when it’s freezing than moisturized palms and a frigid, non-alcoholic drink.

Barely 3 weeks later, I bounce around between the billboards at Time Square beginning to feel like I am the ball in someone else’s pinball machine. I can barely hear myself think with all of the cars honking, bright lights flashing and tourists in my way. I keep getting slingshot into the messages telling me what to think on the screens: “Chew gum to crave fewer snacks!” “Drink beer, it’s cheaper!” “Eat street peanuts!” “Honk if you like Maker’s Mark!” “Keyshia Cole is freakin’ sexy! Wear this men’s cologne and you can have her!” “Try Planet Hollywood hamburgers, you’ll never return to earth, accept when you need to catch up on the episodes you’ve missed of Nip/Tuck!” “No, No No!” Kellog’s is campaigning at me now with thousands of average American’s screaming their “I knew I was Fat When…” stories in my face.

Time Square is no longer the place for the free thinkers that used to gather here. Modern American society is now built on cheap comodification whose first amendment is consumption and final note is greed. Though the advertisers spend millions on their advertisements, it’s not about what they say. As long as you keep looking, buying and believing that that orgiastic consumerism is the way!

I’m slightly traumatized by the crowds of tourists taking photographs of the billboards (what, they don’t have billboards where they live?) and the rush of men and women pushing past me to get to their minimum wage paying gigs. So I decide to step inside of a Time Square café nearly breaking my neck on the piles of trash bags in the way.

The place is lit with fluorescent lights. To the left, there’s a line to order bowls of lettuce, which they will fancy up with other vegetables for a steep price. To the right, there’s a line to order any one of nearly 50 different kinds of sandwiches. It feels like choice for a moment, but then I notice that they are all pre-made. I get a cup of coffee and take a seat at one of the few vacant orange, plastic tables.

Two couples visiting from Spain slide in next to me. On brown, fast food trays, they’re carrying a New York City travel guide along with the plastic food packages they just bought. They’ve come all the way from Europe, it seems, to eat bowls of romaine with plastic cutlery.

How, I wonder, have European’s bought into this illusion, too? Aren’t small port diners and wineries better? Why are they abandoning their sophistication for our cheap plastic comodification?

I’m obviously growing agitated and paranoid in this place. Perhaps it is from the elbows endlessly knocking at my side or the rude stairs thrown in my direction from people standing, looking at me with their heaping trays of food. I can practically hear them saying, “stand up if you’re only drinking coffee. This is my day off and it’s my hour to feed!”

But maybe this feeling comes from some deeper realization. Like that this place, this café, Time Square, this country, doesn’t give a damn about me. All it’s interested in is what I can produce or consume, how quickly and when.