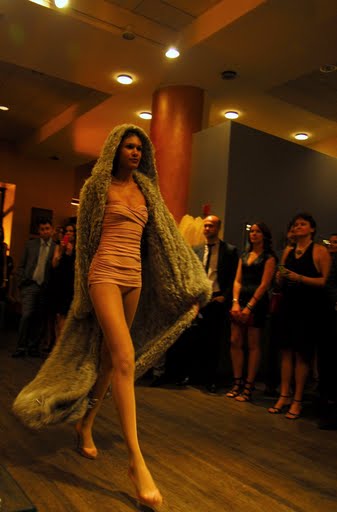 As the elevator doors opened to the penthouse of the exclusive Crown Building, I was faced with a huge open space – I knew immediately that this would not be an ordinary fashion show. Furs aligned either side of the walls on display for the guests to fawn over and try on. The stilettos of the women dressed in beautiful outfits clacked on the hardwood floors as soft jazz music echoed over the speaker system. Beautiful deep purple orchids from “Flowers of the World” were decorated inside clear bowls in all corners of the room. A bar stood in one corner with the official sponsor and official vodka of Fashion Week: Akvinta, being served in three delicious cocktails aptly named to honor the designer of the night: the “Diamond-tini,” “Wild-tini,” and the “Helen-tini.” Two large doors opened up to a gorgeous scenic view of Central Park and 5th Avenue on either side of the main sofa in the middle of the room where the designer herself, Helen Yarmak, was lounging and smoking a cigarette. (Dissimilar to other fashion shows where we see the designer for 2 seconds on the runway).

Unlike the other chaotic fashion shows that took place during this week, the atmosphere was very serene, sophisticated, and laidback. People mingled, threw back their heads and laughed, sipped on the cocktails, smoked cigarettes, and patiently waited for the informal fashion show to begin. There was going to be no runway — the models would simply walk out of the backroom and saunter around the room. While waiting for the time for the models to come join the party, I stepped out onto the terrace. The wind blew slightly as the sun shined brightly as it began its’ descent. Taking a deep breath and taking in the amazing view of New York City with the other guests, waiters intermingled and offered up a tray of small delicious delicacies.

When seven o’clock hit, the models came out and began their showcasing of the designer’s collection of furs. The models all wore a beige/pink colored leotards/corsets with the same muted colored fishnet stockings. Their hair was tied back into a tight bun with smoky eyeliner and dark red lips. Their muted appearance was the perfect easel for the fur collection to stand out even more. Bold colors such as red, blue, green, and orange were seen, as well as more delicate colors as peach and gray. Darker colors were also featured: black and animal printed furs made their way through the crowded room. Despite the risk there was in presenting dark colors in fur for the spring/summer collection, Yarmak still pulled it off. The cuts of the coats ranged from long to short, high-collared, backless, and short-sleeved. Despite being made of fur, the coats were surprisingly light and thin. Unlike the winter fur coats that we are all used to seeing, they were very airy and seemed appropriate for the spring.

When asked, Yarmak coolly stated, “Well, there are different weathers in different countries.”