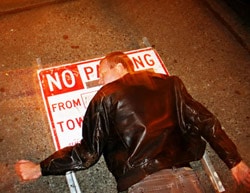 When surveying the nightclub madness it all becomes obvious…

10/ “Sitting in the corner of some nightclub going deaf shoveling coke up my nose.”

9/ “Sitting at some V.I.P nightclub and spending $800 a bottle on vodka so I could appear prestigious and stand a chance of scoring with one of the hot little numbers who specialize in fleecing jack asses like me.”

8/ “ Going to a whore house and getting laid finally.”

7/ “Breaking and entering into a high net worth individuals car and riding around it stoned and drunk before appearing before the magistrate the next morning at least $2 K down for the lawyer who has to rescue my stupid ass.”

6/ “Getting totally loaded along Bedford Avenue before head budding some kid from WestChester in the head that I didn’t like and now facing punitive damages, with half of last weeks dinner along Driggs Avenue too.”

5/ “Getting my picture taken at the most happening restaurant in the city and then doing a double take when the dinner bill arrived.”

4/ “Signing a lease and a $2000 check to the realty broker who helped me get this shit hole of a wall new apartment.”

3/ “Going to a strip joint and blowing my money on some Russian transplant. But really dude did you see those hooters?!!”

2/ “Going to an after hours party with Lindsay Lohan and paying for her blow.”

1/ “Throwing my rent money into the air just as the cameras were clicking at some nightclub in the meat packing district. Boy that was fun, but I sure wont do that ever again.”