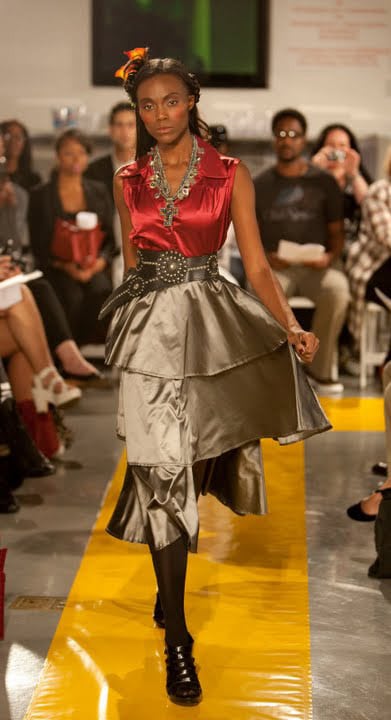 Welcome to the world where the first, second, and third row are all discerning. The world where the first row gets a bow on their gift bags, the second row gets a bowless gift bag, and the third row gets NADA. This was the case at the Alexander Michael Snyder show which I had the honor to attend. I was in the second row, but later upgraded to the first row when there was an opening, but that’s a minor detail. Now with the report, but let me give it away now- ‘simply stellar.’ Kudos to you Mr. Alexander Michael Snyder!

Let’s start with the mood setting: The music. It consisted of a woman screaming dramatically in Spanish/Latino as the beats of the drum bass increased. Looking over the program, however, I realized how the music fit in. Snyder’s collection was aptly named “Kahlo” and was inspired by the painter Frida Kahlo. As the music swelled up in the room, it not only complemented the atmosphere but enhanced the hectic and jittery feel of the room. Everyone seemed excited, chattering and laughing uproariously in what it seemed almost nervous anticipation of what was to come.

With a few moments to spare I made my way backstage past the skinny-minnies and found myself face-to-face with the designer Alexander Michael Snyder himself. Despite the fact that his show was about to commence, he was astoundingly calm as he answered all my questions. He had just moved to the city from Florida a few years ago and graduated from the Art Institute of New York. With the help of previous employers and industry insiders, he was able to make it to where he is today — an up-and-coming designer with a lot of buzz. As mentioned before, his inspiration was Frida. He expanded upon it as he explained how her paintings with “saturated and hidden colors” motivated his current collection and how it even influenced the selection of the models. He chose “healthy looking women — not hangers. Pretty in a Frida-esque way.” With his real-life attitude, it came as no huge shocker that he wanted his clothes to be strong on accessibility. Clothing that could be a “luxurious ready-to-wear brand that every woman could have hanging in her closet.” He wanted to target late-20s to early 40s women (whether they be a lawyer, doctor, or a student) who wanted to look sophisticated and mature.

Charmed I returned to my seat and was left spellbound as the models suddenly started thumping down the plank. With bright colors — mustard, burnt red, navy, neon blue, black being the primary colors- the clothes all shared the common theme of romanticism. With silk, ruffles, lace, billowy sleeves, tiered skirts, and detailed see-through outfits, I wanted to reach out and rip the dresses off the models and run home to stash in my closet. The models were all surprisingly shorter than I expected and didn’t look like they had just come out from the bathroom after vomiting out their only meal of the day. I checked it off to the fact that Snyder had wanted to maintain the real woman appeal. The show ended after 24 gorgeous outfits, thunderous applause, and Snyder rushing out, waving, and rushing back in.

As he stood there I kept replaying the quote he gave me backstage; “I am not trying to recreate the wheel, I am just trying to make it more beautiful because women deserve to feel beautiful.”

To be candid tonight he made it possible. 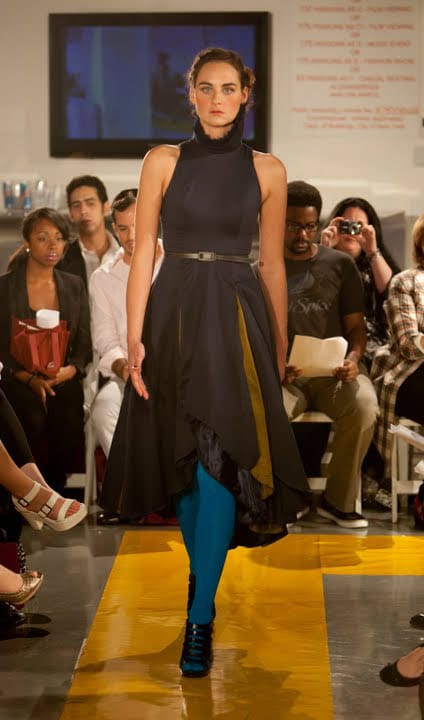 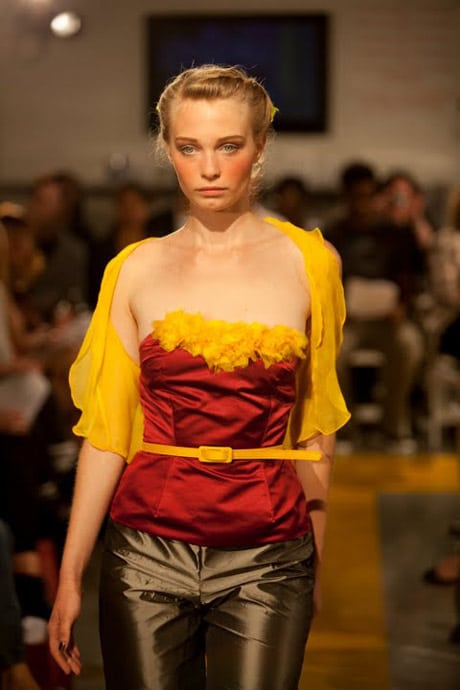 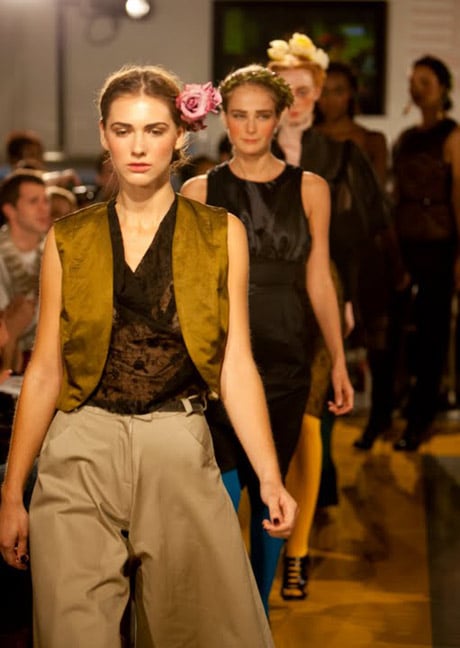