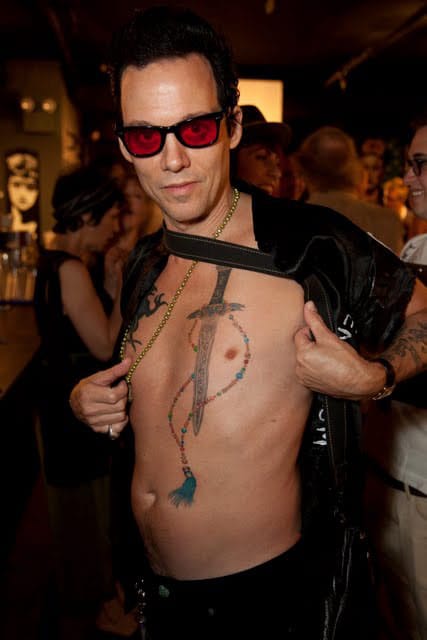 Teetering along in my heels, I tentatively looked around in search of The Gallery Bar. Having never been there as well as have never attended Sally Golan’s Social Night of Exposure, I had no idea what to expect. As I approached a vibrantly lit opening and loud music pounding throughout the night, on the otherwise dark and grim street, a small fluttering of anticipation coursed through my veins.

Standing in full view of the open doors of the Gallery Bar, I suddenly had to take in a vast number of things. The huge crowd inside roared with laughter and sipped on cocktails while the roped off front entrance was being guarded by several burly men. A huge camera with its’ light on full blast was aiming at a beautiful petite blond, who turned out to be the hostess of the night: Sally Golan. Shaking off the initial jolt of intensity, I stepped into the Social Night of Exposure and from then on I felt I had left the streets of New York where haughtiness and cold attitudes were all the rage, into a world of mutual commodore and a sharing of the appreciation of art. 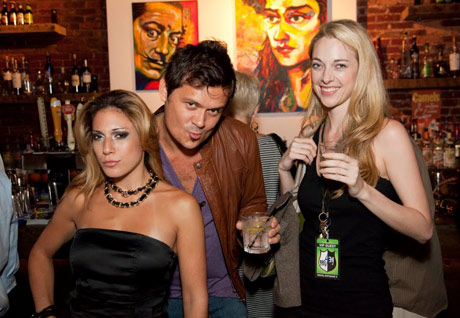 Greeting me upon entering was the sounds of a live jazz soloist hooting on his saxophone and a huge mass of sparkly black garland stapled onto the ceiling that trickled down into the crowd. The installation was by Mark Reigelman, a “design conceptualist, live art installationist and thought provoker.” Golan described it as a “Black Hole” – a gothic chandelier that “evoked beauty but also had a hint of the dark side.” A simultaneous live art gallery in production and bar, Sally Golan and The Blaq List presented an opportunity of the “melding of different mediums together” and an invaluable experience to feel inspired.

Contrast to the darker atmosphere that the gallery bar exuded, the crowd consisted of a substantial number of men in collared shirts with women in chipper day-dresses. With drinks in hand, people were draped all over the place; on the bar, in the middle of the room, and on the conveniently placed sofas located in front of two white canvases that boasted an impressive array of photographs. The photographs were another part of the “showing New York’s edgy side.” Consisting of a series of narrative erotica vignettes, the models in the pictures told “love sex stories” as the photographer JM Darling described it. Shot with models that aren’t the typical Barbie dolls, it enhanced his work to fit in with the “edgy” theme of the night. “I never shoot models until I get to know them. Some of the ideas for the photographs come from inspiration after having conversations with the models themselves,” Darling stated. Styled, conceptualized and photographed with his own budget, the passion he had for his photographs and the stories he wanted to tell shined through.