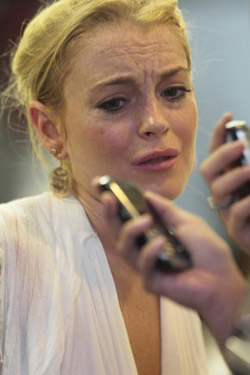 Here’s an interesting tale of bad behavior, entitlement and the stubborn belief just because you are deemed celebrity glamorous you are entitled. Of course who can blame a brat for thinking this, after all how many coked up drunk idiots are there making public fools of themselves with high cheekbones, a nice ass and a famous ex girlfriend?

Welcome to Lindsay Lohan’s life- the girl who is living her own set of fantastical movie scenes in her mind and by extension believes we are living them right there beside her (we are not LiLo…).

Grabbing a cup of ice at the Mott corner deli on Kenmare street on the run Lindsay absent mindedly left her Blackberry on the counter. When the deli boy-Mohamed Hashan realized that the phone was left behind he went outside looking for the rightful owner.

Asking the starlet who was just about to enter a taxi if she had left a phone she checked and claimed that she had indeed. Yet before Mohamed would give the phone back, he wanted to make sure that Lilo was indeed the rightful owner and asked one of her friends to call the Blackberry. Unfortunately for the starlet the Blackberry didn’t register.

It was at this moment that our girl Lilo started playing a very vivid scene in her mind- that started by screaming at our boy Mohamed (whom was only trying to be a good Samaritan);

At which point our boy Mohamed demurred that he in fact didn’t know who she was, nor did he care.

This set our girl Lilo into a terrible tizzy and a series of dramatic gestures (she is an actress after all…) that included laughing, shaking, more screaming , laughing and then crying again.

In any event Lilo eventually got her phone back (only after the police got involved) Mohamed went back to work and the world was once again spared another surreal scene only possible in Lilo’s mind and of course the covers of trash journal NYPost page 6 (and let’s not forget Gawker) where we procured this story from.

When crybabies don’t get what they ‘wah, wah’ want they cry…

By the way what numbers was Lilo really afraid of losing?