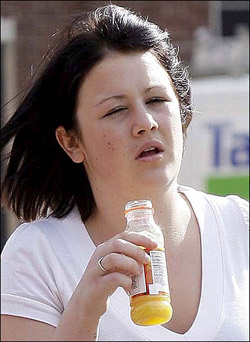 When taunting now comes with a price.

Out of England comes the disturbing tale of Keeley Houghton, 18 (pictured) who over a period of four years went on a personal crusade to lambaste Emily Moore over the internet. Houghton who admitted harassment in court was given a 5 year restraining order which prohibits Houghton from direct contact or any indirect contact, including commentating on Emily Moore on any social networking system, that with a 3 month jail sentence at a juvenile detention center.

What makes this all so intriguing is that this case is the first time ever that anyone has ever been convicted for expressing an opinion, thought over the web anywhere in the world. Such a shock did it cause, that Houghton started crying when the 3 month incarceration sentence was passed.

Taking things to extreme Houghton was noted for stating the following on her status page on facebook – “Keeley is going to murder the bitch. She is an actress. What a f***ing liberty. Emily F***head Moore.” Admittedly not the most polite greeting or status update one can hope to leave friends, assuming Emily Moore is indeed considered a ‘friend.’

Other taunts included going after Emily Moore when she first started wearing make up.

“Bullies are, by their nature, cowards – in school and society. The evil, odious effects of being bullied stay with you for life.”

“On this day you did an act of gratuitous nastiness to satisfy your own twisted nature.”

And this is of course what Emily Moore had to say-

“Her abuse consumed my every waking moment for the past four years. I got so scared I couldn’t even turn on my computer.”

And the clincher comments below-

“The funniest thing about it is that I have no idea why she took such a strong dislike to me. I had never done anything to her.”

To say that Houghton caused unnecessary stress and was an outright vulgar girl (she tried denying the murder threat stating she wrote it while she was drunk, records later indicate that the status update was made at 4pm, not the tyical ‘drinking’ hour) is an understatement.

Of course this could now set a new series of precedents here and abroad and it may mean perversely the things people used to like the internet for, the anonymity (which in Houghton’s case she was plain upfront about) to be mean may now be assuaged and held to account. Which can’t be a bad thing can it?

When bullying on the internet is not as easy as you used to think.