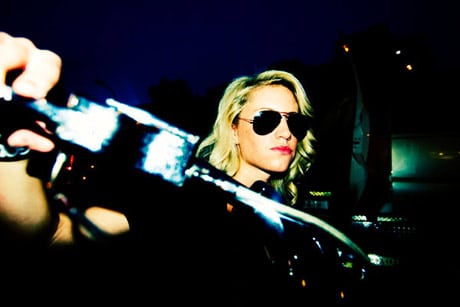 By the time we arrive at Heist Gallery’s reception of ‘Motorcyle Mayhem,’ there’s a bevy of littered bodies on the sidewalk, half intoxicated, most starry eyed and the grand spectacle of primed racing bikes blitzing in slow motion in front of a 60 foot great white shark called “Izzy Gold’s Fuck Machine.” Of course no one is fucking in the limo, but we don’t think the idea has escaped half the people wandering in and out of the mobile cabana.

Part sartorial showmanship and part adulation for all that is fast, sexy, behemoth and symbolically glamorous in the world the installed and dynamic works of Tim Hailey and Milton Carter act as vigorous phallic icons stiff and rearing to go.

From one direction we have uber photographer Peter Ruprecht glaring at us with his shoot from the hip photography style, from the other end we have our dear Keith Lew and from somewhere inside the great white shark we have Patrick McMullan and co snapping like a coyote at all the beautiful people frothing. It’s like coming to a motorcycle finale, and we are all primed to see who will come first, who will shoot the best and who will have the biggest scowl. 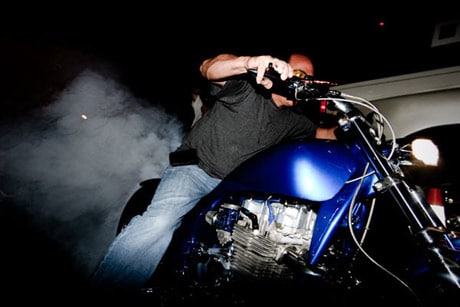