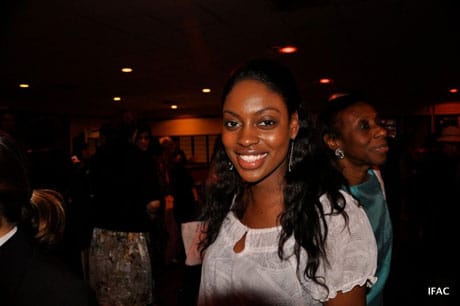 The Designing Women’s Gala, a New York Women in Film and Television (NYWIFT) event, held its 10th annual awards ceremony at Clearview Chelsea Cinemas last night. Though the title may initially suggest a subversive feminist group would be discovered lurking beneath a shiny exterior, I was happy to discover business as usual upon arriving.  A number of media savvy women were milling about, miniature bags of popcorn in hand, to celebrate their roles in film and television, and without alternative agenda.  Ah, the New York woman, so sure of her powerful place in society!  Men are allowed to coexist, and we respond without vitriol; it is the perfect compromise. In fact, two of the three award presenters were men of extensive media accolades.  Sam Waterston, of Law and Order, presented an eloquent portrait of his make-up artist, Marianne Skiba.  John Turturro, of Big Lebowski fame, gave a wonderful speech on behalf of his one-time Yale roommate and lifelong costume designer Donna Zakowska, an interesting woman whose perception of her craft relies heavily on a philosophical exploration of art and beauty.

What is a gala without mayhem or drama, without the heaving masses in hot pursuit of a fleeting moment’s contact with iconic figures of stage and screen? Nothing, of course, and I ran into this melee head on. What could only be called paparazzi, of which our lovely photographer Lee is happily not a part, stampeded through the popcorn-scented hallways to get their millionth shot of Blake Lively, Serena of Gossip Girls, with hair stylist (and true lady of the evening) Jennifer Johnson in tow. It was a stampede I say.  One particularly charming photographer, surly at best with an oily ponytail, who had probably not worn a bra since the New Kids on the Block press junket of 1992, swung her stepladder right into my foot.  Not my toe, not the strong, able bodied heel, but the tender, vein-popping, top portion of my foot.  Defeated, I limped my way over to the “bar,” manned by students of the New York Bartending School, and licked my wounds.

We were ushered into the theatre, and the faint smells of candy-scented lip gloss and perfume put me on the scent of the Blake Lively crowd—the young ticket holders whose stars, by their own estimation, were aligned this very night.  Mothers, dressed as impeccably as their miniature versions, twittered with equal excitement at seeing “Serena” in the flesh. I was surprised at Blake’s elegantly understated fashion for the evening. Her hair was styled in a sophisticated ponytail, and she wore a simple, black trench coat—not to be taken off.