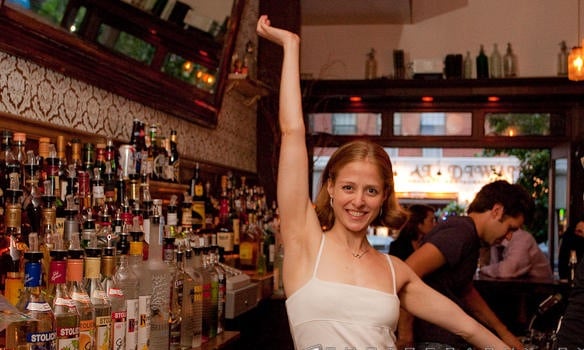 Wednesday night- Destination Bar & Grille, Alphabet City’s newest hot spot, opened on 13th Street and Avenue A.  Though the bar officially opened to the public at eight o’clock, friends of the bars owners and members of the media were invited to a pre-opening open bar two hours prior.  That said we were quite happy to oblige Mr. Dan Maccarone, one of the owners of Destination.

I arrived at six-thirty at Destination and saw the party was already off to a lively start.  One of the first things I noticed was, in place of the usual grimy bar nuts, were small bowls of gummy worms and sour patch kids as well as empty jars as light fixtures in place of usual lighting fixtures.

Settling for a vodka-and-soda from an adorable brunette bartender (when aren’t they adorable?) who served my drink with a quick “here you go, Madame!” and I was off to go find Mr. Maccarone. 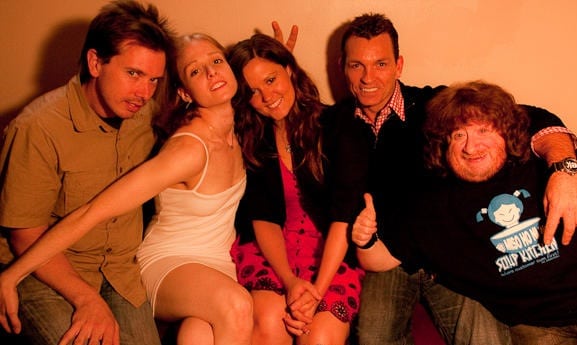 Finding  Dan at the back of the bar being greeted and congratulated by friends and colleagues I was at last able to secure his attention to summon him some questions.

SCV: So, where’d the idea come from to open a bar?

Dan:  It was always something I wanted to do. I knew I was good at branding [Dan helped create the the design for the website Hulu, is a partner at the design firm Hard Candy Shell, and one of the founding members of Slightly Known people.]. I know how to run a business and while running a bar has its unique challenges, it’s still running a business, plus a few of my partners had operated a bars before. So, we decided, let’s do it!

[Dan is the brain behind the design for the website Hulu, as well as partner of Hard Candy Design, and one of the founding members of Slightly Known people.], I knew the basics about running a bar, and a few of my partners had operated bars before.  So, we decided, let’s do it!