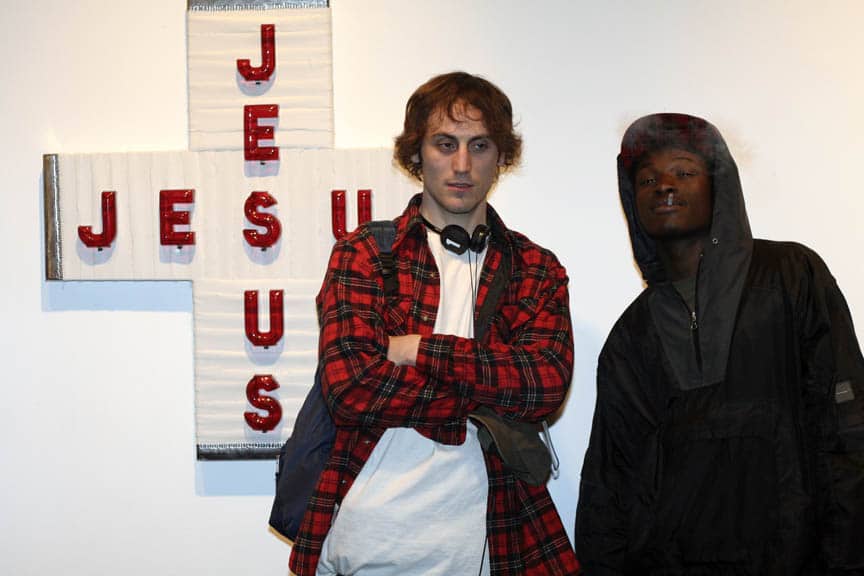 Plato’s theory of forms holds that there exists a perfect other in a removed world of which ours is a sad, poor copy. I believe this to be an acceptable segue.

The Black Honky art show of works by former skate board champion (whatever that term means) Steve Olson, was sponsored by, among others, BlackBook Magazine and Vans Sneakers. Skateboarding, sneakers and one of my historically favorite magazines – awesome! Perfect! Even better, it was in Collective Hardware, a venue so self-important that it sent out its own press restrictions. (Don’t worry, guys, I have no intention of discussing your venue – I quit writing for Interior Design for Blind Hipsters ages ago). How can one even contemplate that this wouldn’t be the single greatest self-promotional show of epic proportions since Gawker’s Editor in Chief –NICK DENTON last masturbated to a picture of his bank statement.

Much like I imagine that to have gone, this was full of pregnant hope, murdered by impotent reality. 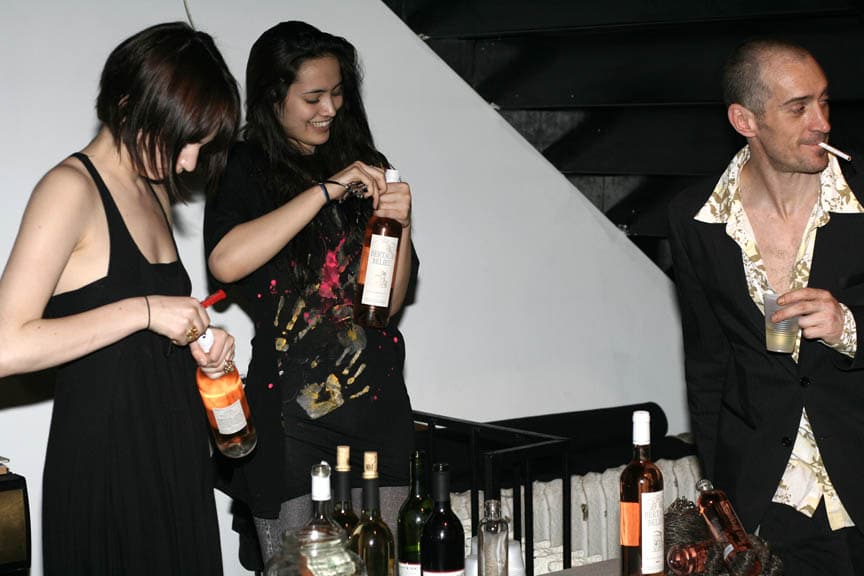 First of all, much to the chagrin of this b-boy clinging to his last shreds of street credibility as I continue to accept assignment to these grease-fights, there were absolutely no sneakers on display. If a sneaker company is going to sponsor anything, there should be some shrunken dollhouse of sporting talent: large, black men manipulated to run around a to-scale basketball court while an urban celebrity yells platitudes into a mic. Or, at the least, a miniature ramp with 10 year olds practicing tricks while Steve and the other elder statesmen of the X-Games laugh grandfatherly at their antics. None of the above. The only sneakers on display were worn by the very non-Olympians who left their roach infested L.E.S. walk-ups to compete in the day’s race to the longest, stringiest hair and the free beer power-lifting tournament.

There were no 10 year olds, no skaters, no hip-hop heroes, and, sadly there were no guests. Everyone appeared to be working for a magazine and each of us were either journalists (to a sort), photographers, press handlers or bloggers. We eyed each other with suspicion or lust. Or, in some cases, with lustful suspicion. And, in the rare instance, suspicious lust. We discussed our assorted after-parties, each priding ourselves on the great pull of our event bookers. “My booker got me into an event at The Beatrice Inn…I might shower for that!” I knew what was being said because there was no music. There was no theater. There was only us and the artwork.