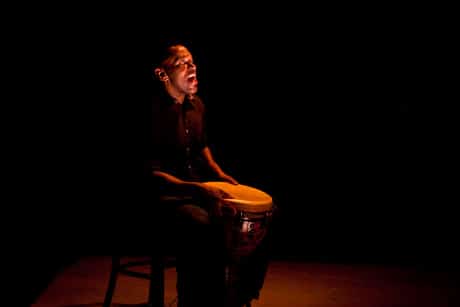 Driving along the I-94 back into the city one night James Carter the Associate Artistic Director of the chic and progressive theater company TerraNova was alarmed by what he saw on the billboards there in front of him. The sign said something to the effect- ‘New York City, -18 million inhabitants and 78 thousand seats, it’s your next destination.’ Not sure what to make of it he kept driving until he arrived on the set of his latest workshop production of ‘Feeder,’ due to be released later this year, a production that suddenly doesn’t infer destination but infact something that’s now become revolutionary in the theater world.

That said I sat down with James and the equally affable Jennifer Conley Darling – the Artistic Director of Terra Nova to find out where theater is now going, why off off broadway theater suddenly matters more, how theater is suddenly being reignited and why they suspect the media do their best to keep away from the theater, that plus how this darling ensemble has suddenly become the toast of the town…

SCV: Who is TerraNova?

Jennifer: It’s a collective of artists dedicated to the development of work be it as solo performances or multi layered theatrical productions to the enlightenment of the community.

Jennifer: It’s been a process of building blocks. We just didn’t arrive. We came about six years ago, first starting off over at Center Stage, then getting residency over at PS 122 in our fourth year until we recently secured our residency with DR2.

Jennifer: Well we think it’s very important to nurture the solo artist, and of course some of the more provocative work. What we have is a workshop for writers to develop their work into ensemble pieces but at the same time we are intent to go beyond what most people would consider palatable theater and engorge your sensibilities.

SCV: How does one go about doing that?

James: It’s an awareness of what is palpable in the first place and from there introducing provocative digressions to the audience that will rivet them.

SCV: Can you be more specific?

Jennifer: Right now we are committed to the 6th SoloNova festival (a festival for solo performers and visual artists.) which opens May 6, and we’ll be introducing a range of talent from different genres, be it visual artists, monologues, absurdist and of course to the grotesque with ‘Red Bastard,- Buffoon Performer.’

SCV: Let me guess Red Bastard is going to the rivet factor?

James: If you consider the history of theater it existed originally to accost the audience, to force them into a greater consideration of their plight, of their station in life. With Red Bastard this is exactly what you get, he puts it right to you, really pushing the boundaries.

SCV: This somehow implies that where we are in the theater world today isn’t necessarily where we want to be?

James: You have to appreciate with the medium of TV, stories were suddenly being communicated in a mechanical box which served to keep an appropriate distance between the viewer and the show. So instead of experiencing drama on stage we began to experience it in a truncated form through electronic media. And that’s who theater unfortunately has been competing against, that plus the internet- but we decided to integrate all elements to force a complete emotional engagement.

We don’t think theater should be about arriving at a destination, some theater seat but a complete emotional connection.