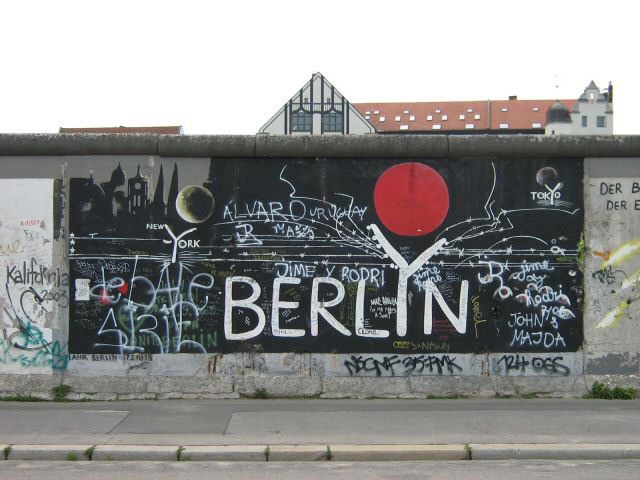 We’ve been hearing it for ages now, but is it really true? Your mighty self better pack itself off to Berlin and make the most of the vibe, creativity and the vast amount of space that can be had for a night out at a dive some where in Queens. Theory, friction, fables, Hollywood trend or just the jet set giving up on New York…?

What you have to understand about Berlin before you even arrive there is the binary system that makes this diabolical city work. Understand that what you perceive as glamour others perceive squalor, opportunity as neglect, passion as indifference, creativity as self capitulation. It’s a city that can only function on these very core contradictions, and yet here is the irony, if it weren’t for these contradictions you and I wouldn’t care, wouldn’t fantasize about living there, gladly accept the heroin den that is now becoming your new home.

I’m standing in front of a piece of work that can only be described as vintage seminal Berlin work. What it does is what Berlin has always done. It’s just you get to read about it now. I’m here at the Armory show conversing with Galerie Crone’s Anna Jill Lupertz. Conversing, but really paying attention to the whole wall folding behind me with a whole new tabulation system in place. Who is responsible is Hanne Darboven.

“This is what she does, she takes something, tries to understand how it exists and then once she does that she re invents it all over again. After all who is to say how one can keep time, memory, document events, ideas. Hanne chooses to re interpret it for the way it suits her.”

It’s this statement that defines the diabolical nature of the Berlin set. In fact one can argue for the longest time this is what use to define New York. With it’s diabolism in the 1970’s, vast poverty, crack and coke epidemics (do these things really ever go away?) in the 1980’s and until the 90’s the wide gulf between the preppy Park Ave set and the much maligned Soho set was wide enough to keep you locked away and paradoxically creating the type of art, films, literature (and of course the junk bonds and derivatives that some started to play with all back in the late 80’s, until we were all eventually playing with them in one form or another) that re defined boundaries.

“When the wall went down,” Lupertz reflects “…you saw things that were shocking and surreal. The people from the East left as fast as they could, and the people in the West came just as fast they could too. They would come and find houses empty, food still in the fridge and that would be it, You would come and stay and see what you could do…”

Just like Tribeca and Soho, places like Kreuzberg and Prenzlauerberg are the new tre riche hang out spots. To used to have lived there was to live amongst outlaws or become one themselves. “It created the opportunity where you had this vacuum to redefine yourself. Nothing had to be held to a strict rule, unlike the rest of Germany. It was like a Black hole.”

If black holes are known for not letting light in or out but paradoxically ever expanding at an infinite rate then how does one describe the human experiment that used to go on in towns like New York that have for now have shifted to Berlin?

“It’s strange, because everyone still wants to come to America, make it here, and maybe they would but it is very expensive here.”

“And yet here you are from Berlin showing in New York.”

“Edge or money that has now disappeared?”

“If the money goes the edge will come back. It will force things to be redefined.”

If one were to go for a walk in what once used to be rogue suburbs like Kreuzberg they will undoubtedly come across bastions of Americans who until recently would’ve found themselves manifesting themselves in some left bank hotel or across the road from some illicit brothel along rue Pigalle. Instead they’re hanging out at all the new book stores, the trendy cafes and pushing their baby strollers.

The irony of course is how the black tie events are now coming to Berlin, the film festivals and the world’s youth, and America’s newest beautiful exports- the uber celebrities who come not to make art but buy the art you used to make in America.

The art you used to make under the veil of a bloody carcass and a transsexual down the road blowing some non descript dude (probably a German tourist…).