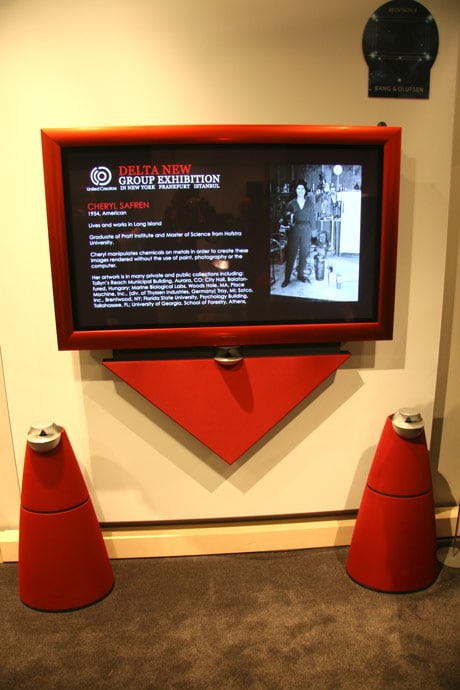 Here’s an idea. You’re a starving artist trying to get your work out, except there’s one problem, the art galleries aren’t returning your phone calls. It’s that time of day you begin to reconsider your sanity except this time round United Creators think they have a solution for you. According to them they’re here to revolutionize the art world and to finally really turn it on its head.

Being an artist is the dream of many a soul from all over the world. Creating art for many is the thing that elicits freedom and self expression but so often bankrupts the checking account. Of course by now you’re taught it’s okay to be a starving artist, but frankly we never believed in such myths despite the romantic allusions.

Of course the real nuance isn’t the fact that you are actually starving it’s about the desire to continue the journey regardless of whether the art worlds pays heed to your world. This is where real art is created and dare we argue what being an artist is really about.

With the advent of the modern artist and his or her desire to be heard and the profligate art world shaken to its core by a moribund economy one has to wonder what will happen next. After all there was a time when setting up shop in the districts of Soho or Chelsea to champion compelling artists was a valiant and often rewarding experience except when it suddenly changed. What it became was a feast to the beat bonanza, with the art world consumed by only block buster work while your broken heart sang on a see saw wondering what it did so wrong.

We’ve seen it in the recording industry, the publishing industry and lately you’ve been seeing it in the art circuit. It’s got a number off heads scratching and a few bank accounts reeling (if the dismal sales of last week’s Armory are any indication).

Of course it needn’t be this way. Last Tuesday saw us step into the bastions of United Creators a conceptual paradigm shop revolutionizing the context of how business is getting done or perhaps ought to be done. 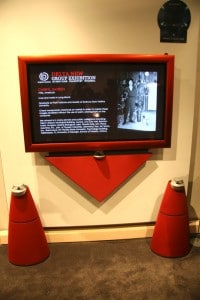 Held at BANG OLUFSEN, the uptown denizen of audio, television and surround acoustic equipment were the likes of pre eminent artists Skye Nicolas, curator Sonya Reynolds, United’s president- Hale Yamakoglu, the impossibly brilliant Bazaar Royale, Nathan and their manager Ali Samii (at Monalis 360) as well as a gangly of slinky uptown types and their ascots.

Wafting through the crowd I was intrigued by the images of art in high definition. A sliding rotation of work would appear, (courtesy of the Gee- BOX, a hard drive of sorts) where collectors could now suddenly absorb a wider dossier of compelling work from anywhere in the world (it was reported to me that the show was being held concurrent in Frankfurt, and Istanbul) whilst not having to set foot in a gallery.

“The intent is to bring the work of artists that may not necessarily be getting seen, introduce a discriminating clientele, an exclusive venue and see what that leads to. It’s all now become virtual, you don’t have to go to some gallery to see the art because the art is now here in front of you. Hypothetically anyone can now be showed…”

Listening to Mrs. Yamakoglu I was reminded of a conversation I recently had with publishing pioneer Barney Rosset (of Grove Press) who was instrumental in breaking down publishing barriers in the 50’s and 60’s when he introduced the likes of Samuel Beckett, Albert Camus, Jean Genet, William Burroughs, Jack Kerouac, and Allen Ginsberg to an unknowing America.

At the time I had posited the question that if the mass tabloid were the new cultural currency what would be the next cultural paradigm? His response struck me as uncanny and brilliant.

“Technology. It’s revolutionized the way we consume the world and what we now consume in the world.”

Asking him for clarification he went on to further explain “ for the longest time the traditional publishing houses (swap for art galleries) have been the gatekeepers of what got published or not. As a consequence only a certain kind of book (let’s even get bolder here and swap for movie or music now made) was being published but that changed once new technology became available.

“Since the cost of becoming a publisher had gone dramatically down, as everything was now being done ‘virtually’ without regard for having to account for rent, storage, insurance, the cost of printing and salaries one could now through a click of a computer begin to put out there things that for the longest time were simply just not getting out.”

“Why weren’t they getting out?”

“Partly economics, partly taste, and mostly because the sure bet in an industry we’re the cost of productions were high and the outcome of any venture often unpredictable one would be compelled to stick with what was perceived to be the sure winner.”

“Now that they were getting out?”

As more players enter the market, especially players devoid of a certain corporate dogma or institutionalized rhetoric one can hope to see more liberating work put forth and an opportunity for the consumer to be offered more dynamic choices, books to read, films to see and now courtesy of ‘United’ more art to collect, or at least a different type of art.

Looking around the burgundy tinged room I could suddenly envisage collectors, artists and the new middle men (United Creators and their partners ie, Bang and Olufsen) all congregating in a virtual reality where the way art was being promoted and consumed radically changing.

Asking Skye Nicolas for his thoughts he replied;

“It brings the onus back on the art galleries. I think for a long time they had carte blanche and for a while they played this game of cat and mouse with artists. But I think this will force their hand, get them to really think about the artist again and get the work out there, and really champion it.”

Turning to Emmanuel Fremin, owner of EFG Gallery I asked him how he too felt about it.

“Yes I think it’s very interesting and it opens the possibilities. Of course I wonder what’s to stop someone from just going to the internet and looking for the artists themselves and anyway, there’s still nothing like seeing live art and the look and feel of the three dimensional.”

Ms. Yamakoglu listening intently finally then spoke, “ …true one can find work on the internet, but how is that vast work referenced? What we’re doing is bringing work that is already out there and by virtue of it not been properly seen either because it’s locked in some gallery storage bin or just simply not being represented we’re now giving particular collectors, consumers the opportunity in a real time framework to be made aware of such work. It’s kind of like being at an art gallery except your office has now become the gallery.”

“And you the art dealer?”

Finishing her Merlot, “ I like to think of us as the facilitator.”

As I listened to the lyrics of Bazaar and Nathan in the background one thing was for sure, the cultural landscape was now becoming more of a level playing field and that could only mean more compelling and provocative work going forward.

As I have reiterated I have never bought into the romantic idea of ‘the starving artist,’ after all it’s far more romantic when ‘the artist is thriving.’