SCV: How is that they don’t care?

JM: Well unlike in the Western world were we have these understood values, such values are not permeated through society in Cambodia. After many years of having been subjected to the Khmer Rouge and the resultant atrocities regard for life is trivial at best. In a way you really can’t blame these people, they don’t know any better and war and terror has an interesting way of destabilizing notions that we take for common in the Western world.

SCV: So what happens, these girls are kidnapped? They become sex workers at the age of five? How can this be? Surely the authorities know about this? Why isn’t more being done?

JM: They are kidnapped, and sometimes sold by their families for as little as ten dollars. It’s ingrained in their culture. I don’t think they willingly do it. Desperate times call for desperate measures. And yes more should be done, and by presenting this dialogue we can from over here impart some changes in that part of the world. 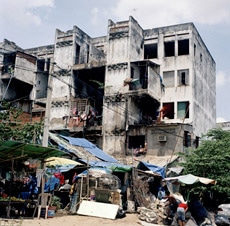 SCV: Shouldn’t we be forcing our government here to force sanctions, trade embargoes on the government there?

JM: It’s very similar to what goes in Darfur, Sudan. We have to bring awareness to such practices and strive to help these girls and force change. Yet you really have to understand one of the reasons this continues is because it’s a cultural phenomenon and this ultimately requires a re alignment of values, something not easy to do when you have been subjected to horrific destruction and exploitation.

SCV: Nevertheless, it’s shocking to read that a seven year old girl can end up servicing up to thirty girls a day. I can’t begin to manage to understand what happens to these girls psyches. 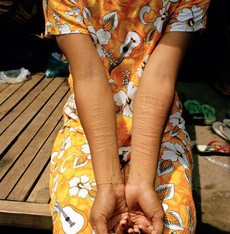 SCV: Tell me about the picture of the girls with the knife wounds on the inside of their arms?

JM: In order to survive their captivity these girls turn to amphetamines. What happens is that during moments of extended use these girls resort to self manipulation by slitting the inside of their wrists. I wouldn’t have known had one of the girls not reacted to me showing me her tattoos. It was a cry for help.

SCV: How is that the media is not paying enough (or any?) attention on what’s happening over in Cambodia?

JM: I think part of the problem is that what happens in places like Cambodia is so removed from what we experience here. We live in a very self absorbed culture, and I don’t think it’s very easy to consume the heartache of others.

SCV: Doesn’t it present a moral dilemma that we in the Western world are not getting involved? After all you just told me one can go shopping for girls by age bracket the way one goes shopping for fast food here.

JM: It’s certainly an issue that warrants our attention. However it’s never easy to change the policies of another part of the world. That said, bringing awareness and forcing a dialogue and some sort of sanctity and opportunity for the girls who make it out is very important in forcing change.

How is Online Casino Gaming Growing in India?

The History of Football Boots