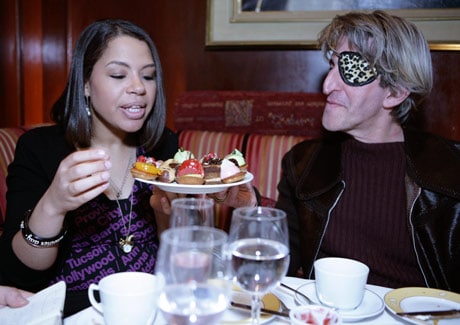 This Saturday we caught up with one of London’s real super stars, Daisy Martley. The girl who used to front for Noonday Underground and Morcheeba who was literally here for a whirlwind blast and ‘going for broke,’ albeit first class. What followed was a delightful repartee on fame, the music industry, class structure and why Daisy can’t wait to move to NY.

When we arrived (tardy as usual) to meet Daisy at our preferred tea house – Cafe Payard– Benjamin Pasteur, Scallywag’s editorial contributor and liaison we walked right past her wondering if the sublime girl flicking her Marlboro light onto the Saturday wind was really the girl we had come to see. Full of apology and lots of double kissing we then proceeded to make ourselves comfortable in Monsieur Payard’s posh and affable abode. We must’ve thought we were in Knight’s bridge London, and yet really by the end of our time we were keenly aware that where we were was in Daisy’s heart.

Daisy Martey for all intensive purposes is a renegade, a provocateur, supremely talented and very well bred. Speaking in her very finely refined English accent, the same one that has held the world audiences spell bound we learnt that what meets the eye isn’t exactly what’s going on in her mind.

The daughter of a famous Ghanian musician (Rex Martey who in turn insisted on Daisy securing her own fame) and a ‘white Jewish lady,’ Daisy was encouraged to pursue her goals from a very young age. Trained as an opera singer and classical guitar player, this girl was plying her craft when one day she came across electro pop’s Noonday Underground and eventually cult legend and the digital electric soul group of Morcheeba whom she auditioned for and was given the part…until in the end Daisy realized it wasn’t a part she really wanted. It’s this independence of spirit, bravado and quintessential misdiagnosis of terminal cancer that brought her to where she is today- ‘literally going for broke.’

SCV: So what brought you to New York?

Daisy: A couple of years ago I was erroneously diagnosed with terminal stomach cancer, and I was told I’d only have a month left to live. So there I am thinking I’m going to die and what have I done with my life and how when you get down to it, life is fragile and you’ve really got to be bold and live it. So anyway to cut to the short I get a bunch of royalties and I start spending it when I later find out that I owe all this money to the tax department back home. Rather than pay the money I owe, I’ve decided to spend everything I have and write a book about it- “Going for Broke.”

SCV: We trust you are spending your money on adulterated luxury and first class.

Daisy: Well if you must know, I did fly first class to NYC.

SCV: Naturally, what’s a girl to do? So tell us where do you stand with the authorities back home? Is there a police van waiting upon your return?

Daisy:(laughing) That would be interesting, well I hope not. No actually I’ve already secured bidding rights for the book back home.

SCV: Can you tell us a little about celebrity scandals, seeing that you are both and have actually come out of one as well. Are they really career forming?

Daisy: Well you have to realize the press in Britain are quite cryptic, and they like to do a good job of keeping you in your place. They’re always waiting to see you walk outside of your perceived bounds. I mean we came back one night to Amy’s house (Winehouse) at around five in the morning on a Monday morning and there they were the press waiting. 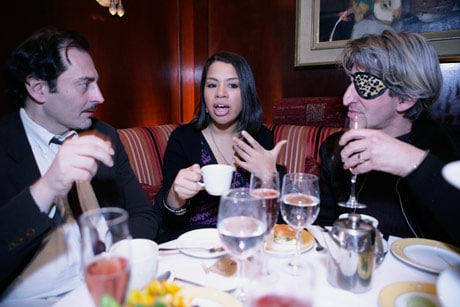 SCV: That’s interesting. In the US one has full permission to be as crazy or out there as possible. Driving high on amphetamines with your knickers off, as long as it helps sales.

SCV: So Pete Doherty’s drug antics are really frowned upon?

Daisy: I know Pete, and I think for him he really cares about his art and lives for it. This is something that isn’t expressed, what’s expressed is what a screw up he’s supposed to be.

SCV: Talking of which you were accused of being a real screw up?

Daisy: Well here’s the crunch, whren I first joined Morcheeba it was really a great fit. Then came the pressure to accede to a certain image. They’d stipulate in my contract that I was suppose to go to the gym five days a week…

SCV: Not five days a year?

Daisy: And all this other criteria. That give me pills to try and drain the water in your body…

SCV: Why, is the music suppose to sound better if you have a six pack?

Daisy: (laughing) No, but in today’s culture the better looking your brand the better the sales, and that’s what the labels ultimately care about.

SCV: Then you were accused of being a drug addict?

Daisy: That’s the irony, I never touched any drugs in my life until after the whole thing was over.

SCV: And of course the curiosity immediately waned?

SCV: Tell us about life in Britain. What is to be British?

Daisy: You know us Brits are belligerent.

SCV: So it’s not just about fish and chips?

Daisy: In Britain we have this weird dichotomy unlike in the USA where you have a lot of different ethnic groups living where it’s acknowledged and tolerated in Britain it’s something that is understood but not openly discussed.

SCV: Or tolerated? Coming from a racial background yourself how are you received?

Daisy: Well that’s a tough one, cause first of I’m an artist before I’m black or white or whatever and artist’s aren’t really appreciated back home, I mean they are to a certain level, but if they are to really succeed they’ve got to go abroad. It’s like people look at you as if you’re not serious when you tell them you’re an artist, it’s as if they expect you to fess up and say ‘right, it’s over, now let me get a real job.’

SCV: But you have never had a full time job.

Daisy: I think that would be impractical. My real job is to create art. Although mind you there was a time when us and the girls were living off the dole (that’s welfare kids, you should all know what that means by now), and we’d take our dole money and go to these flash celebrity events,

SCV: Well, what’s a girl to do. There’s only so much fish and chips one can eat. By the way are you enjoying your high tea? Do you think I could have some of caviar crepe?

Daisy: (laughing) Must you?

SCV: Well we could always get some more. That or another round of bellinis.

(another round subsequently arrives forthwith)

Daisy: I tell you living in Britain, there’s this thing like your suppose to make particular choices. See people had a time making me out, given that I’m this black girl who’s very well spoken.

Daisy: Well, you’d be forced to make a choice growing up, as a biracial girl you’d be expected to hang out with your white friends or black friends, but not both. 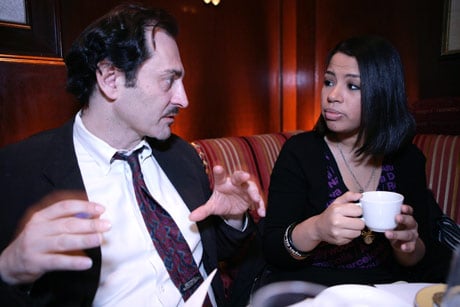 SCV: Really? Why is race such an issue?

Daisy: I think it’s fear really. Fearing not what you don’t understand, and I think there’s quite a bit of resentment with people perceived to be abusing the welfare system, especially new immigrants.

SCV: Or the tax system?

Daisy: Well, you know I’m going to have to declare bankruptcy when I get back, but the amazing thing is the thing after 7 months you can go out and get another 200 000 quid loan.

SCV: Really, and anyway you’ve got the hype of your new book which you’ve been ‘researching’ that will keep you very afloat.

Daisy: It’s funny, I haven’t even written it yet and I’m getting these really ridiculous offers.

SCV: Offers which we hope you will take. Talking of debt how is it that perceived over in Blighty?

Daisy: Not very well I’m afraid. Really I’m aghast how everyone is in debt here, and of course we all have credit cards back home but it’s not something you openly discuss. It’s not very proper to discuss money, race, welfare, things like that.

SCV: That or being a glamorous music star living life up in NYC?

Daisy: Well, I’m not as glamorous as I used to be.

SCV: Do you intend to change that?

Daisy: I’m actually going to be partnering up with Marcus Lancaster, producer behind the X factor and working on some new recordings. Very pop, very slick, really do what I want, take my own stand.

SCV: You mentioned earlier that in the UK the artist isn’t really encouraged to be a star, until of course they become one of course. What do you think is the case in the States?

Daisy: I think it’s interesting, everyone is encouraged to believe they can be a star tomorrow morning, or at least the chance exists, where as back home, that’s not really the case.

SCV: How is Amy Winehouse perceived back home.

Daisy: I think they love her being brilliant and all that, but at the end of the day the industry would rather push an Amy Winehouse with half the voltage, some one like Duffy, a sort of subdued Amy, an artist that acts the way they are supposed to behave.

SCV: Talking of behavior, how has Madonna been perceived over in Blighty?

Daisy: Oh, she’s not very well liked. She was trying to hard to be British, and anyway poor Guy Ritchie, she was just trying to dominate him.

Daisy: Oh, I’m afraid, she’s too wild for the Brits.

SCV: As you get set to write your book, what do you think the central message of the book will be?

Daisy: That life is for the living, that one is obliged to live their full potential, and accepting social norms, ideas of what’s appropriate is a kind of selling out, or to be fair, there are people who can be happy with the white picket fence, but not me. I’m obliged to live passionately, take a few risks, live life passionately. That’s what an artist has to do, it’s what makes their work desirable in the end.

SCV: As opposed to the manufactured drum machines, and clone boy and girl bands?

Daisy: Well it’s conditioning isn’t. But good music is good music, and that’s something you can always feel.

SCV: No matter how many sit ups you do?

Daisy: My art is my true exercise, that’s what motivates me, I’m willing to push boundaries for that.

SCV: And that means getting possibly in big trouble with the tax authorities back home.

Daisy: Well, I’m technically spending money I owe. Either way, I’m going to write about it.

SCV: Can you tell us who inspires you and why?

Daisy: Definitely Grace JONES and PJ Harvey, they’re so beyond their game and flamboyant, I love the spirit.

SCV: Finally is it better to be broke or rich?

Daisy: As long as you’re living for you whom you need to be.

SCV: Thank you, shall we order another round of Bellinis?

Scallywag and Benjamin would also personally like to thank Monsieur Payard and his wonderful crew, thank you Julian.