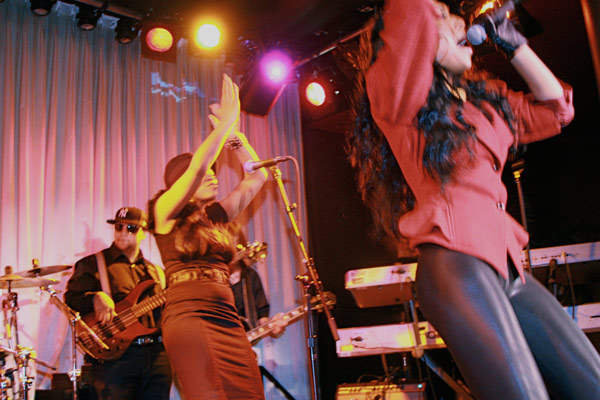 Tuesday night, Mother Nature made good on Punxsutawney Phil’s promise that there would be 6 more weeks of winter.  Over ice-covered sidewalks, blinded by snow, New Yorkers could be seen waddling like penguins, striving to arrive at their respected destinations without an embarrassing slip. Cars slid, Busses stalled, cigarettes extinguished. It was no night to be out, but it wasn’t exactly a night to be in either.

Cloaked in mystery and wrapped in a brown utilitarian trench coat, I saw her standing at the end of the line waiting to get into the Canal Room. Catherine Deneuve, eat your heart out.

As onlookers froze, we slinked in to thaw ourselves out.

“I’ll have whatever you’re having”

Unbuckling her mystique, she introduced a dress that poured over her delicate frame like black mercury.  She reminded me of a young Lisa Bonet, you know, before she went all granola on us. And tonight, well tonight she was all mine.

Camera’s flashed as we made our way up to the balcony for a better view of the show.  It was packed, and for good reason too. Paper magazine was hosting a record release party for Canadian born, Guyanese Soul artist Melanie Fiona.  She’s toured with Kanye West, and with Roc Nation as her management this girl seems poised for success.

I found myself sandwiched between a lively character with large white-framed sunglasses and an eccentric gentleman that invoked a certain Dr. Moreau like charm who looked excited for the show. Not knowing either of them I decided to introduce myself.

“You look interesting, what’s your name?”

“You’re right, how terribly rude of me.  Hello, I’m Fixxy, What’s your name?”

Turning to his friends in shock, “He wants to know my name!”

This went on for a bit.  He tells me his name is Coltrane and that he worked the red carpet on MTV for three years. While I guess that working MTV’s red carpets does make a person “someone”, I can’t be held accountable for my lack of interest in a television station about music that doesn’t play any music at all.

“So have you heard this girl sing?”

“I’d stick around, she has a good voice.”

“Paper Magazine listed me as one of the 50 most beautiful people!”

“You don’t say? Well Tricia is one of the 5 most beautiful people here tonight.” 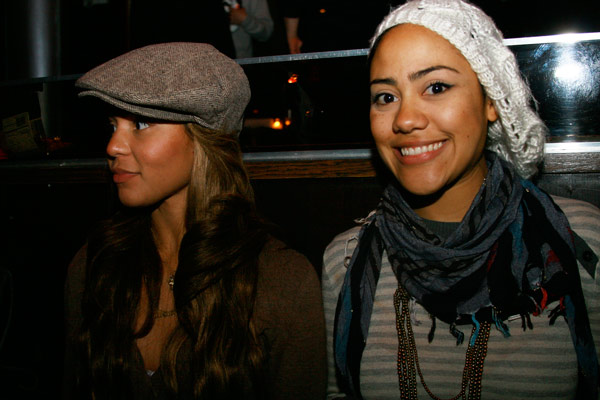 I shifted my interest to the other individual who introduced himself as Mickey, the editorial director of Paper. With the band coming on stage we didn’t have much time to talk so I asked why Paper was hosting the event and he told that they were doing a story on her in the next issue.

Making his way to his seat he says to me, “I hope that you get your fix.”

With the venue packed, anxious onlookers stood shoulder-to-shoulder fixing their impatient eyes upon the stage.  The lights dimmed and the bass drum kicked while the brass demanded with funk and fury for the arrival of Melanie. And out she came, launching immediately into a slick number about a girl and her gun entitled “Bang Bang”.  Crooning lyrics such as:

“Let me introduce you to my lucy I don’t care if you like me…” and,

She resurrects Bonnie and leaves Clyde in the dirt. But it was the second number that had the unmistakable scent of hit.  Armed with a sample of the Zombies classic “Time of the Season”, Miss Fiona gave everyone a lesson about the way she wants it.  With her legs incased in skin-tight graphite vinyl and two back up singers in black pencil skirts, Melanie wrote her sexy all across the stage as she demanded, “Give it to me right, or don’t give it to me at all!”

She had my full attention. Then the third song came on and well, I started to lose interest. “It Kills Me” was just another R&B slow jam about a girl who’s being treated bad by her man but doesn’t have the sense to leave. What happened to Bang Bang? Where’s my femme fatale? Where’s the Bond girl I fell that in love with 7 minutes ago? I suppose you have to please everyone but it felt like pandering to me. In the oversaturated market that hip hop and R&B is, can there not be one who is willing to shatter the norm? The fourth and final number was just as bad, delivering the message that she doesn’t “do it for the glory or for what people might say/I’m gonna do this my own way…” Which is odd because it sounds to me that she’s doing it the way its been done before.

Don’t get me wrong.  I like this girl.  She has the look, she’s got the voice, and I like where she’s going with it. I’m just a tough sell. They can’t all be hits and I look forward to hearing the rest of the album upon its release. Visibly crestfallen I turn to Tricia and tell her that I’ve heard enough and its time to go.

Squeezing through oversized sweatshirts and polished sneakers we make our way to the coat check where Tricia gathered her intrigue.  While she geared up I caught a glimpse of Jay-Z sneaking out sans Sasha Fierce, or any entourage for that matter. as a portly fan called out, “Jigga WAIT!”

“Now where was he hiding?” I think to myself.