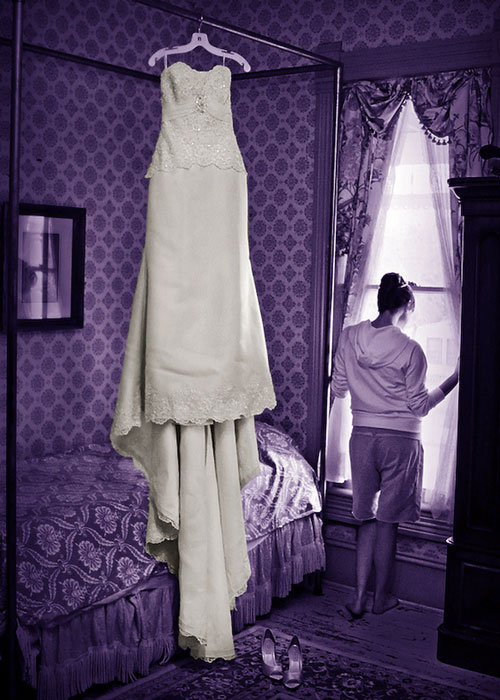 There comes a time in a woman’s life, around the quarter century mark, that she has a quarter century crisis. Mine happened about a month ago, as I sat in a market bar, around 11 pm, sipping champagne and reading a magazine. I was dressed to the nines, smoking endless cigarettes, barely looking up from the thrilling read when I realized: I’m surrounded by duos.

Huddling in dark corners of my favorite bar, sipping on the finest cheapest French pinot noir, half the women in the room are waiting with bated breath: is tonight the night he pops the question? All around us are women who have been fantasizing about the wedding (note, not the marriage) since they were little girls. That all encompassing day, when finally they can walk down the aisle, all teary eyes on them, and that knock-off Vera Wang dress. It truly takes your breath away. (Or for some, ignites your gag reflex)

So who wants to be a bride these days anyway?

What went wrong? The Wedding and the actual Marriage, are two separate entities, and the lines have been completely blurred. The idea that you’d like to spend the rest of your life with one man or one woman is a beautiful one. However, most people don’t fantasize about arguing over how to raise the children, money problems, lay-offs, wandering eyes and dried up libidos. No one wants to fantasize about the real hard work it is to maintain a relationship of any sort. Daydreaming about white dresses and horse drawn carriages is much easier. Regurgitating vows one does not intend to keep (or quite frankly, understand) is common practice. “I love my husband (as long as he keeps his job, entertains me, takes me out, doesn’t get fired, doesn’t take a pay cut, keeps his mother at bay… or any other irreconcilable difference that will lead to divorce). For richer or poorer is more of a shiny slogan on the disposable logo that most marriages have devolved into.

So let’s look at the facts; A good 50% of marriages end in the worst way possible: Divorce. And so many others are betrayed unknowingly by affairs, and the like. So why is it then all these magazine covers keep telling us to take the plunge? Weddings are big business and Vera Wang’s new mansion isn’t going to pay for itself.

The wedding, as my close circle of female friends likes to call it, has transformed itself into a parade of vanity. I remember after this one particular wedding, the bride quickly announced to the groom that he’s got a month of fun left, before its baby birthin’ time. And these people are in their early thirties. So quick to settle on a life so mediocre. Don’t get me wrong, there’s nothing mediocre about procreation and wanting to create life (I’m told its one of the most rewarding experiences out there), but to suffocate it with that kind of talk just seems tacky. Isn’t there any mystery left in the world, or even people seeking it? Where is the joy in knowing exactly where you will be buried at the tender age of 25?

And that seems to be the trouble with misunderstood lasses like yours truly. I may not know where my head will rest two months from now (and if the universe weren’t such a cruel place, it’d be on Miguel’s shoulder (a muscle-y, oiled up surfer … from Brazil… falling asleep as he caresses my hair into the moonlight…. sigh. ~ although more likely in bed with the true love of my life, my room-mate Julie, smoking cigarettes in a dingy Berlin apartment) but there’s a stability in that idea too. My constant state is in flux and there’s comfort in that. To settle down in the suburbs with minivans and grape drink is to settle period. My editor asked me to write this article as a single girls guide to the city. And its all been said before. I don’t want to run through the street screaming “I’m single and fabulous”, because I do agree with the idea that everyone is always looking for someone (and it also seems pathetic this day in age to constantly seek out that confirmation). Finding that someone is so difficult though, that I have to believe most people who marry in their twenties are settling. They must be. There’s no way (if I am to use my powers of logic and reason) that they’re all so madly in love. Its more about ticking biological clocks and simply being in a long-term relationship at a certain age and believing that one might as well take the next step. As long as the bride or groom isn’t completely without a personality, has a chunk of change saved up (this is a big one, as weddings aren’t cheap these days) and not totally unfortunate looking, it’s a match made in mediocrity heaven. So that begs the question, would a girl like me ever get married? And how can I without resorting to hypocrisy?

I once asked a friend of mine, of like mind, if she ever saw herself walking towards the alter in a puffy dress. She replied with the most magical image: if she and her partner were walking down the street, somewhere like Budapest or Copenhagen, past a church, her idea of perfection would be to simply walk in, no bravado, no frivolity, and marry. That is something I can understand. A marriage/wedding, only about the couple involved. No in-laws from hell trying to get their ideas in, no silly shot glass souveniers or seating arrangements. Pure Romance. And going back to the divorce rate, what’s to say this kind of thing has less of a chance? If nothing at all, at least it makes for a great story.

So there I am chain smoking wondering to myself what it’s all about, or really how I’m supposed get to the next phase of my life without feeling like, what my friends patronizingly refer to me as, “a free spirit” or “weirdo”. After all I’m not against marriage as the one and only way, or that weddings are a morbidly pedestrian event (but let’s be honest, next to the Miss Alabama Pageant, they kind of are) .…it’s just that I’d like to approach the next 50 years of a my life with a little more honest, and without having to be inendated with these societal standards of tradition, cakes, babies and condos.
After all I think it’s okay to stand for oneself, and for all those femmes who honestly do think it’s a load of rubbish. And we are snobs about, and we’re pretty pleased with ourselves.

So why waste youth on marriage and vynill siding when I can go for love and adventure instead?
And you can keep your white dress, you’ll probably need it at the funeral.