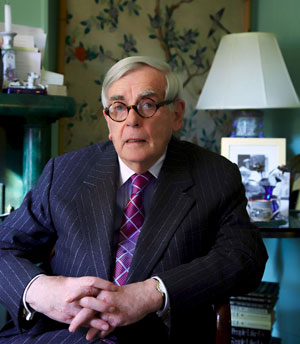 What is fame, celebrity? What is it about fame and celebrity that keeps vast amounts of us addicted to it, keenly aware of it and ultimately glorifying it, some of us, especially in the case of a Mr. Dominick Dunne deeply embedded into it, even at the cost of his integrity, sanity and better judgment.

In the recent American premiere of “Dominick Dunne; After the party,” at the International Hamptons film festival I caught up with the eponymous and equally celebrated diety and his Australian producers; Kirsty de Garis and Timothy Jolley. In their wake I posed a series of questions exploring the glorification of celebrity, its observed advantages and unobstructed (mis)behavior and perhaps more poignantly the acceptance and rejection of such behavior by a man who has spent his whole life amongst them and ultimately through his resurrection becoming his own kind of celebrity. The type of celebrity that has come into his own grace and self reckoning as opposed to our unabashed collective hyperbole.

SCV; What prompted you to produce a film about Dominick’s life?

Kirsty; I had just written an article about Dominck back in Australia and the response was overwhelming. So we then approached the Australian film corporation as well as the support of the Australian government to pursue this film project.

SCV; What was the allure of Mr. Dunne’s life that appealed to you.

Timothy; Dominick’s story has drama, a drama that parallels not only what went on in his own life but what what goes on in the exclusive lives of ‘Hollywood’ celebrity, both on and off the stage, and by extension our own lives.

SCV; Or as it alludes in the film, in the court rooms.

Kirsty; Yes it’s very interesting. How people with fame and acclaim can be given special privileges or let’s say the type of doubt that most people under similar circumstances would find themselves in very deep trouble.

SCV; In the film, Dominick, you mention that the fakery, the gimmicks it all works. It acts to keep people star struck and to never have to really question what’s really going on. My question is why does it work? And why are people so caught up in it?

Dominck; I’ve never understood why. It’s always been the way of the world. There’s a certain desire for omnipotence that we like to attach to people, things, places.

Tim; I think deep down in all of us there’s a deep desire to want to belong. And celebrities after a while become our collective extended families and I think we all had a hard time when we were growing up to believe that our extended families weren’t behaving anything but exemplarily, after all they were always there on tv day after day. It becomes hard after a while to believe that these people may actually have faults and worse still not love us as much as we loved them.

SCV; Is it true that in your case Dominick that the people you were now hanging out with through your associations at work were in some way your own very extended family?

Dominck; We spent our summers together, had eat outs, lived amongst each other. I couldn’t have ever imagined that one day these people would turn on me. After all they weren’t just on my tv screen, they were there in my very back yard.

SCV; In the film one senses a heart wrenching struggle to come clean with yourself.

Dominck; It all became too unreal, behaving the way I was, carrying on, and then to one day be cast aside, with nothing to fall back onto except myself, and that didn’t go down too well at first.

SCV; Your redemption as an astute writer, commentator of Hollywood lives and privileges has led you to not only comment on the goings of ‘high society’ but to question the legitimacy of their behavior. Does it pain you to realize that to some degree you too once behaved like this?

Dominick; I think it’s natural after a while to stop believing that the fantasy, the ‘unreal life’ around you is just a prop , the colossal houses, paparazzi chasing you, is just a prop. You begin to forget that you are mortal, and that in reality you are just as vulnerable as everyone else.

SCV; Unless you have money.

Dominck ; One still has a conscience.

SCV; Tim, Kirsty what do you think?

Tim; It’s interesting, as Dominick vilifies it all but at the same time desires it, And I think that’s the struggle, to want it for the right reasons.

SCV; To expose, to inspire, to explore?

Tim: Yes I think so. It’s what one has to do sometimes to come clean with one self.

Dominick; That’s the trick in it all. That if you look hard enough, there’s always a chance for all of us to grow into ourselves. It’s never going to be easy, but if you look at the lives of these celebrities as easy their lives look, trust me it isn’t, because all the props and toys are just that, even if they are big and shiny.