A Houston man previously charged with murder has been arrested after his pet Bengal tiger was spotted outside on the front lawn causing distress amongst local neighbors. While the wanted man was taken into custody, the animal remained un-accounted for.

Victor Hugo Cuevas, 26, who earlier in the day evaded attempts to be placed under arrest went on on the run and was charged in absentia with felony evading arrest after fleeing Houston Police Department patrol officers Monday morning, according to a police Twitter statement.

‘The tiger portion of the investigation is continuing.’

Neighbors first noticed the tiger roaming around a front yard on Sunday. Video caught (see below) a fellow neighbor becoming visibly upset (do you suppose…?) while the tiger was outside and prowling around. 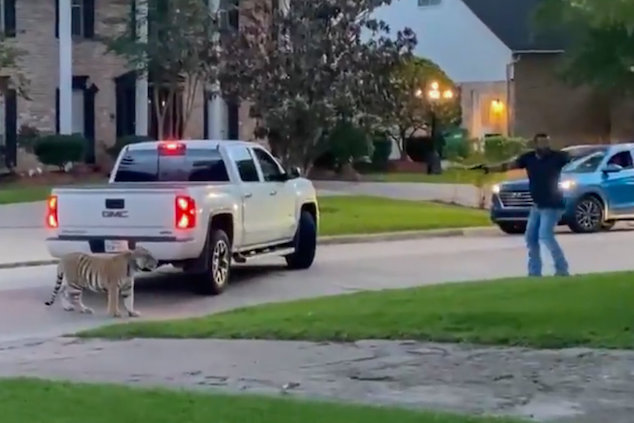 ‘Get the f–k back inside. F–k you and your f–king tiger,’ the man can be heard saying in the video while apparently pointing a gun at the suspect and the collared big cat.

‘I believe the NextDoor app notice went out, and an off-duty deputy came to the house and confronted the owner of the tiger,’ HPD Commander Ron Borza said in a press conference earlier on Monday.

There was a ‘brief confrontation about the tiger being out in public, which is against city ordinance to have a tiger here in the city of Houston. The owner of the tiger took the tiger back into the residence.’

The HPD later arrived at the house, and Cuevas allegedly put the tiger in a white Jeep Cherokee and fled the scene, Borza said. He added later in the press conference that the suspect also owns two monkeys, which are legal in Houston if they weigh under 30 lbs., and that it was unclear if Cuevas had the monkeys with him.

‘There was a brief pursuit, and the man got away with the tiger,’ he said. ‘We are actively looking for him today.’

Houston police said the suspect is about 28 years old, 5 feet 8 inches tall and weighs about 130 pounds. Anyone with information about his whereabouts or the tiger should call cops at (713) 308-3100.

Despite police capturing the wanted man, the immediate whereabouts of the man’s pet tiger remained unknown.