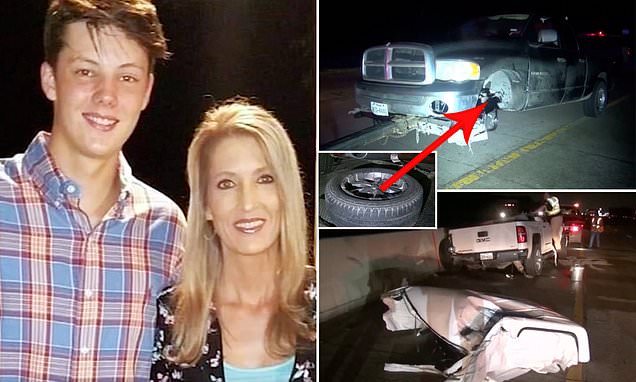 It could have happened to any one of us….

A Texas mother died instantly when a runaway wheel flew off another vehicle and smashed into her windshield as she was driving on the Eastex Freeway on Thursday night in New Caney.

Carol Hardy, 52, of Hockley was traveling in a white GMC pickup with her 17-year-old son, Kayden, in a southbound lane on the Eastex Freeway in New Caney when the wheel from a Dodge pickup truck traveling northbound flew over the concrete partition.

Her son, who had been playing baseball in Lufkin, was asleep in the backseat at the time of the wreck at around 7.15pm on Thursday, as mother and son were returning home after the game.

Kayden was taken to hospital with a hand injury. He is now back home, while the 16-year-old driver of the Dodge was unhurt in the freak accident.

Driver should have been aware

After the wheel struck, the Hardys’ truck rear-ended a nearby Buick, injuring the driver, a father, who was driving with his three children. The family of four were taken to hospital and released with light injuries, ABC13 reported.

No charges have been filed against the Dodge driver and the crash is still under investigation.

Mechanical engineer Mike Poutous, of Poutous Collision and Mechanical, said the incident may have been caused by the rupture of one of the hub bearings – which attaches the wheel to the vehicle’s chassis.

He said that this problem would have created lots of noise, so it should have been obvious to the driver that there was a problem.

‘You’ll have slop in the steering wheel, you turn the wheel and the car is not responsive or in the case of the hub bearing you’ll have a noise – it gets quite loud,’ he said.

Hardy was a mother of two to Kayden and a daughter, Caly, and wife to Ron Hardy, according to a GoFundMe page.

A dedication reads: ‘She was her kids’ biggest fan, and quite possibly the nicest person you’ve ever met.

‘The family now needs to pay the funeral costs and for the hospital bills. During this difficult time we ask that you give what you can and say a prayer for this family.

‘This is an unexpected loss that has left her family completely heartbroken.’

Well-wishers paid tribute to Hardy on the GoFundMe page, which by Saturday morning had raised nearly $20,000 for the family.

Teresa Laurito wrote: ‘This statement is so true, ”the nicest person you’ve ever met”. What a loss for the world.’

‘Many prayers for an overflow of comfort, peace and healing.’

In 2017, 738 people died in tire-related crashes, according to the National Highway Traffic Safety Administration.

The NHTSA insists that most of these incidents are preventable, and has released safety guidance for motorists.

Advice includes having your tires checked at least ones a year and regularly checking them to ensure they are properly inflated.