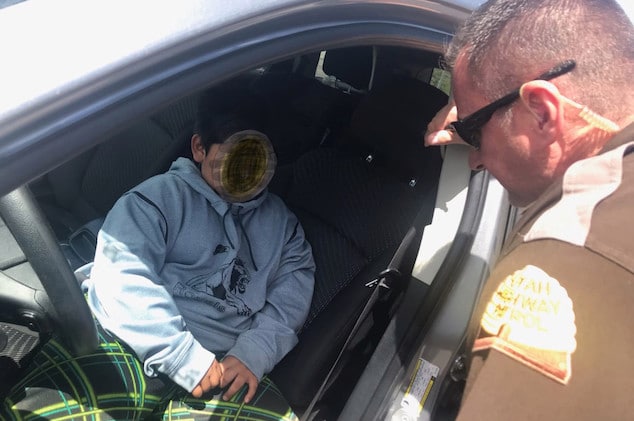 5 year old Utah boy Adrian Zamarripa caught driving parent’s car en route to California to buy himself Lamborghini after his mother refused to buy him one when he asked.

A 5-year-old boy was discovered driving his parents’ car along a Utah freeway on Monday — apparently on his way to California to buy a Lamborghini.

The kid driver, since identified as Adrian Zamarripa made it a handful of miles, from his home in Ogden to I-15’s 25th Street offramp, Utah State Police said.

Troopers initially thought they’d come upon an impaired driver, but soon found their perp was actually a child with a penchant for luxury cars. The boy who turns 6 next month could barely able to reach the pedals.

The boy told them he left home after an argument with his mom, in which she refused to buy him a Lamborghini.

After driving his family car down I-15, with the intent to drive to California and buy a Lamborghini, 5 year-old Adrian Zamarripa got a hefty scolding. He also got the ride of his life, the day after. @KSL5TV was there. See his reaction, 5&6pm. pic.twitter.com/grT0ByKMzy

Where there’s a will, there is a way…

Yes I know kids, your parents also refused you to buy a Ferrari when you were six, but you persevered in the belief one day you’d graduate from the toy model to the real thing.

Not so for our 5 year old tabloid media sensation.

Undeterred the 5 year old Utah boy told officers decided if his mother wouldn’t buy him a Lambo, he’d go get one himself.

But there was a hitch.

‘He might have been short on the purchase amount, as he only had $3 dollars in his wallet,’ state police posted on Twitter.

Their post included a photo of Adrian Zamarripa in a grey sweatshirt and patterned shorts, wringing his hands inside his parents’ car.

UHP Sgt. Nick Street confirmed to KSL that the boy is indeed 5 years old, though the angle at which the photo was taken may have made him look older.

Cops didn’t mention a punishment for the boy — who has since been re united with his parents and presumably recounting all the money in his piggy bank.

All You Need To Know About Campervan Rentals

The Most Popular Types of Online Gambling Games