Jamie Black-Lewis received loans from the Paycheck Protection Program for her two spas,  in Washington state. Many of her 34 employees think they will make more money collecting unemployment benefits than from their regular paychecks.

A case of class division between owners of capital and hired workers has led to acrimony for a Washington state spa owner who has found herself being condemned by her staff after effectively forcing them to give up a higher take home pay via unemployment as opposed to the salary they ordinarily make after she qualified for a small business bail out.

Until recently, Jamie Black-Lewis employees had been on unemployment after the coronavirus forced her to close the doors on her two ‘non essential’ outlets, Oasis Medspa & Salon, in Woodinville, and Amai Day Spa, in Bothell.

But Black-Lewis who still had rent to pay on her two shuttered venues, was able to qualify for that state’s Paycheck Protection Program (PPP) forgivable loan program made available for small business owners, receiving $177,000 and $43,800 in loans for her two spas.

The law, the CARES Act, offered $349 billion in loans for small businesses struggling as a result of Covid-19. Banks, backstopped by the federal government, can fully forgive the loans under certain conditions.

Under the conditions of the loan, Black-Lewis is obliged to use the funds to pay her 34 employees their full normal wage – which they’d stopped receiving in mid March.

But there was a catch. 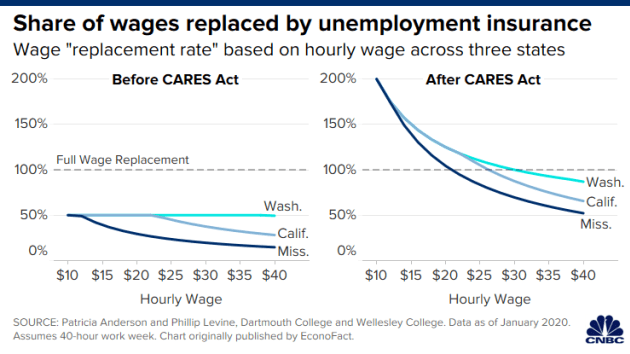 Being forced to return to work or at least have Black-Lewis resume paying workers their normal salary and rates put many of her workers earning far less than what they were making on unemployment benefits.

‘It was a firestorm of hatred about the situation,’ Black-Lewis explained via CNBC.

‘It’s a windfall they see coming,’ Black-Lewis said of unemployment. ‘In their mind, I took it away.’

She added: ‘I couldn’t believe it. On what planet am I competing with unemployment?’

The additional $600 workers had been receiving was meant to replace roughly 40 per cent of a person’s prior wages, according to a national average cited by the House Ways and Means Committee.

The temporary padding on top of state unemployment (which run through July) opens the potential for lower-wage workers to come out ahead. In Washington, the breakeven is around $30 an hour, or approximately $62,000.

Equally unclear is to what degree workers received tips and whether in absence of customers they’d make any tips as a buffer to their minimum wage – which many employers seemingly depend upon to retain staff.

Black-Lewis was equally aghast when even some of the well-off employees seemed to be mad at the loan.

‘They were pissed I’d take this opportunity away from them to make more for my own selfish greed to pay rent,’ the entrepreneur said.

The owner is ultimately going to follow directives on handling the loan while expressing her annoyance at how the process has now gone.

‘They [may not have] the choice ultimately, but I don’t come out as the nice guy,’ Black-Lewis said. ‘Bad will has been cemented into the business because I took it away from them.’