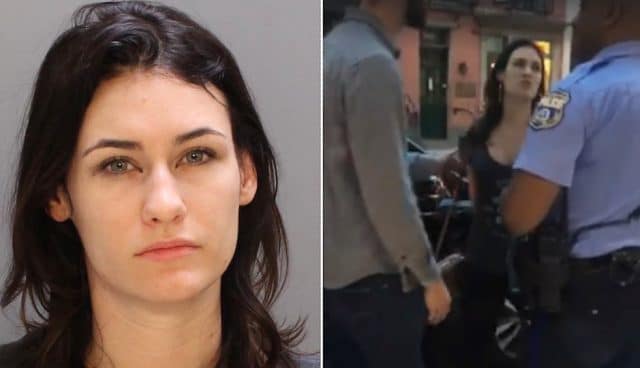 Colleen Campbell a Philadelphia TV reporter is fired going on a drunken expletive tirade caught on tape after being asked to leave a venue. The loss of innocence.

Also entering the tabloid sweepstakes is TV reporter, Colleen Campbell, 28 who was caught on film unleashing an expletive tirade against a Philadelphia police officer.

Campbell had been filming a segment at Philadelphia’s Helium Comedy Club, Sunday night, when she went off on a rant, calling a cop a ‘fxcking piece of shxt’ along with spitting on another man after being kicked out of the venue.

The incident led to Campbell, who had bragged she worked at a ‘fxcking news station’ being fired from her gig at PHL17.

While Campbell mostly worked in news production, she occasionally went on air as a reporter noted the dailymail.

Matters came to the fore after the ‘news reporter’ had been asked multiple times to leave after disrupting a show featuring comedian Craig Robinson with her loud whispering. She allegedly then got into a fight with bar staff on the way out.

And that’s when the real news began….

Video of an ensuing confrontation between Campbell and security outside the venue, eventually made the viral rounds, after being shared on Facebook by New York City comic Wil Sylvince.

‘You guys are f***ing dictators… You’re f***ing c**k suckers,’ Campbell was filmed telling the police officer outside. Saying later that she was unaware that she was being filmed. Or simply by then not giving a damn….

Continued Campbell, ‘I did not do s**t, I stood there and laughed like the rest of the audience like I should. I did not disrupt anybody.’

Campbell was then asked to ‘walk away’ along with another man she was with, but that too proved to be a fruitless endeavor as our collective heroine lashed out.

Began screaming Campbell, ‘Or what? Or what, mother f***er? Lick my a**hole,’

Slight pause. Tragedy is the moment is when one doesn’t know whether to laugh or cry.

And back on the merry go round we go…..

Continued our anti-heroine, ‘How about that? F***ing piece of s**t. That’s why nobody likes f***ing police… in this f***ing town.’

The police officer by now his patience tested to the full, took to placing Campbell in handcuffs after appearing to spit in the face of a man standing outside the club. At one point, Campbell took off her shoe and told the man to smell it.

Faster and faster, let the merry go round spin out of control ….

And how the merry go round keeps going ….

At one point Campbell is heard telling the officer to stop tasering her, despite the man insisting he was only putting handcuffs on her.

The five-minute tirade ends with Campbell shouting at the officer that she works for the news station.

Campbell’s fantastic performance led to her being charged with resisting arrest, criminal mischief and disorderly conduct.

Since becoming a tabloid hero, Campbell has deleted all of her social media accounts, having at one point posted on Facebook that she had only had one drink and flagged the possibility she may have been drugged.

She later told the Philly Mag she had two drinks at the club and several others earlier in the night. Which is perhaps Colleen’s backhand way of saying, ‘I HAVE A DRINKING PROBLEM’. Or simply, ‘I never let an opportunity to get fxcked up pass my way’.

Explained the tabloid sensation, watching the flames of her self combustion wafting from the sky: ‘I feel awful. That’s not me or how I speak or how I talk or how I was raised. I had to delete all my social media, because I’m getting threats,’

‘I don’t know what to think. I know my limits. I’m a bartender. I didn’t feel wasted walking in.

‘I wanna apologize to the officer. I don’t remember the whole altercation at all. I remember feeling attacked. I would never talk like that. It was like watching a whole different me.’

Never mind Colleen, there’s always a career as a tabloid blogger in the offering if things ever become too desperate.

Kathy Griffin: My career is over!
Tiger Woods: Whoa, did I eff up or what?
Colleen Campbell: Hold my beer… https://t.co/0Sqm3WvB5o