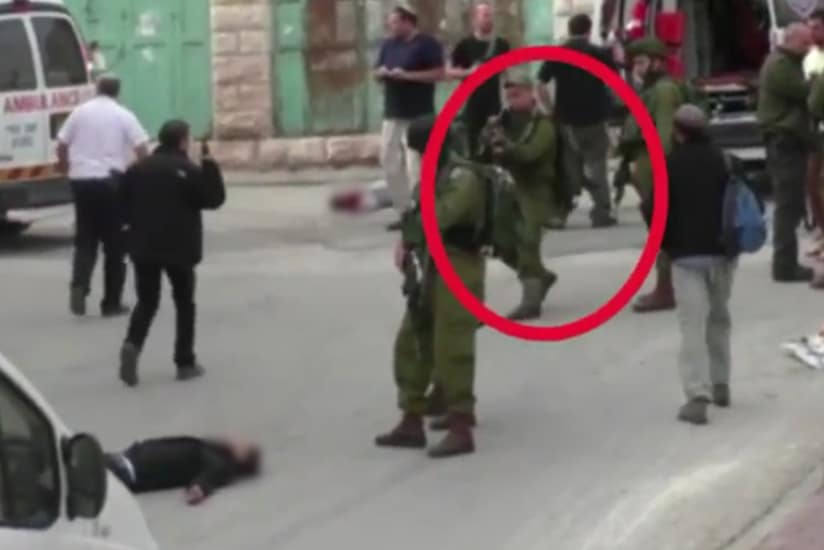 Sgt Elor Azaria sentencing: A military tribunal’s decision to jail an Israeli soldier 18 months jail leaves a nation divided as the military and a nation itself were put on trial.

Sgt Elor Azaria an Israeli soldier was on Tuesday sentenced to 18 months prison after shooting dead a Palestinian attacker who lay on the ground wounded and unarmed.

The sentencing by Israeli’s military court ended a fractious year since the incident which deeply divided the nation.

Along with jail time, Azaria’s sentence also includes a year’s probation along with a demotion in rank. Of note, prosecutors had demanded the soldier be given 3-5 years jail time notes a report via ynetnews.

Ironically, prior to Azaria’s sentencing, the soldier’s defense lawyer, Yoram Sheftel criticized the prosecution as being ‘irrepressibly bloodthirsty’ for the severe sentence it recommended.

While many condemned Sgt Elor Azaria’s sentencing as a ‘joke’, including many Israelis along with many Palestinians, protesters who had supported the army man were outraged that the soldier hadn’t been able to walk free.

Sgt. Elor #Azaria convicted of manslaughter and sentenced to 1 and half years in jail. Should have been pardoned. pic.twitter.com/YWGNLnxn9a

Told a supporter of Azaria’s, Sigalit Cohen: ‘I’m a mother of soldiers, of fighters just like him. How can I send my kids to the army now?’

Adding: ‘You are a soldier, you have a gun, you are a fighter, that’s your job. He only did his job.’

Told Col. Maya Heller, a judge speaking on behalf of a military panel in Tel Aviv, ‘The acts of the defendant are serious,’

‘The accused damaged the purity of arms which is so holy in the Israel military. There is a need to safeguard humanity.’

Adding: ‘The defendant shot a terrorist without any justification. The only value that was harmed by the defendant’s actions was the value of life. Azaria also defiled the purity of arms which is upheld by the IDF.’

The head judge went on to say that Azaria could have conceivably have been sentenced 20 years for his actions.

Scheduled to start his sentence March 5, politicians have already called for the 20 year old Azaria to be pardoned.

‘Even if he erred, Elor should not sit in prison. We will all pay the price,’ said Education Minister Naftali Bennett, leader of the nationalist Jewish Home Party and an early supporter of the soldier.

Palestinians condemned the light sentencing, saying it served to encourage Israeli soldiers to use excessive force.

‘This sentence is a joke, and it shows how much discrimination Israeli courts practice against Palestinians,’ said Issa Karaka, the Palestinian government minister for prisoners.

Azaria’s sentencing came after the soldier was convicted of manslaughter last month in a rare case of a military court ruling against a combat soldier for lethal action taken in the field.

Army commanders claimed that Azaria had violated the army’s code of ethics.

Nevertheless the soldier’s plight generated support among the public, many of who saw the Azaria as a scapegoat for a misguided elite that has sought to harshly punish a soldier who they say responded to an armed attacker trying to kill other soldiers.

Azaria, an army medic, was caught on a cellphone video last March as he fatally shot the wounded Palestinian, just after the man stabbed a soldier in the West Bank city of Hebron.

The incident caught on film by a Palestinian human rights activist (see below), showed the victim, Abdel Fattah al-Sharif lying on the ground badly wounded and already unarmed when Azaria shot him in the head.

Reacting to the sentence, the dead Palestinian’s father, Yousri al-Sharif, retorted, ‘If one of us killed an animal they would have put him in jail for God knows how long. They are only making fun of us.’

Fathi al-Sharif, an uncle of the victim, said the sentence was too light. ‘It’s not a punishment,’ he said. ‘This will encourage other soldiers to do the same.’

The shooting occurred at the height of what has become more than a yearlong wave of Israeli-Palestinian violence. Since September 2015, Palestinian attackers have carried out numerous stabbing and shooting attacks that have killing 41 Israelis and two visiting Americans. During the same time, Israeli forces have killed 235 Palestinians, most of them attackers.

Palestinians and human rights groups have accused Israeli forces of using excessive force in some of the cases and even harming innocent people mistaken as attackers.

Following sentencing, friends and family sing the national anthem, call Azaria a “hero”. He hugs his mother and father, then leaves. pic.twitter.com/9iIGiqp5pd

‘Sending Elor Azaria to prison for his crime sends an important message about reigning in excessive use of force,’ said Sari Bashi, Israel and Palestine Advocacy Director at Human Rights Watch. ‘But senior Israeli officials should also repudiate the shoot-to-kill rhetoric that too many of them have promoted, even when there is no imminent threat of death. Pardoning Azaria or reducing his punishment would only encourage impunity for unlawfully taking the life of another person.’

Azaria’s defenders said he shot the assailant in self-defense, with hard-line politicians demanding the soldier should be either cleared or released with a light penalty.

‘The prosecution was thirsty for Elor’s blood and the sentencing proves that,’ Yoram Sheftel, one of the soldier’s lawyers, said outside the court.

The uproar has put the army in a delicate position.

Military service is compulsory for Israel’s Jewish majority, and there is widespread sympathy for soldiers, since virtually every family has a member who is serving or has served in the past.

Prime Minister Benjamin Netanyahu, who initially defended the military, later softened his position and called Azaria’s parents to console them. After the verdict last month, he called for Azaria to be pardoned.

The dispute helped fuel the resignation of Defense Minister Moshe Yaalon, a former military chief who sided with the army.

His successor, Avigdor Lieberman, visited Azaria in court during the trial. But since taking up the defense post, Lieberman has lined up behind the army. On Tuesday, he asked the public to respect the sentencing and urged ‘all sides to do what is necessary to put an end to this affair.’

Col. Maya Heller, head of the three-judge panel, noted as mitigating factors in Azaria’s sentencing that the incident took place ‘in hostile territory’ and it was Azaria’s first real operational experience.

‘We took note of the harm suffered by his family,’ she said.

During trial the sergeant the head judge noted Azaria refused to admit he was wrong, along with show any contrition or express remorse for his actions, with the panel ruling that the soldier did not open fire out of danger — but rather to harm the assailant.