The men’s deaths came after a friend Justin Blakely notified authorities after the men failed to re surface after entering the water system at Weeki Wachee Springs State Park. Both divers had been missing for three hours before Blakely called police.

The water property and surrounding areas is managed by the Florida Fish and Wildlife Conservation Commission.

A report via WFLA tells of the dive site being 50 miles north of Tampa where the trio had gone for a three day trip.

Despite Patrick Peacock and Chris Rittenmeyer being experienced divers and well aware of the dangers (and perhaps tempted by them…) they nevertheless decided to tackle the notoriously dangerous underwater cave system despite dire warning signs on the surface telling potential divers that death awaits them if they should enter the water system.

Reads a sign at the mouth of the cave: ‘Stop. Prevent your death. Go no further,’

‘There’s nothing in this cave worth dying for. Don not go beyond this point.’

The message is accompanied by a cartoon drawing of the grim heaper hovering above the bodies or doomed divers.

Despite the sign, Blakely a Broward County man said his friends headed down into the underwater maze as he stayed on the surface, notes a report via the dailymail.

Blakely told investigators the trio were supposed to regroup at 3pm an hour after the duo descended. Yet it wasn’t until after 3 hours had passed that the man notified authorities.

Upon being notifying the Hernando County Sheriff’s Office, rescue divers went out to search for the missing divers, but by Saturday evening they had been unable to locate either man.

It wasn’t until Sunday morning, circa 9am that rescuers located the bodies of the two missing men in about 260 feet of water inside the caves. They were found close together, according to police.

Hernando County Sheriff’s Office spokeswoman Denise Moloney said they were in a, ‘very dangerous and complex area of the cave system’.

According to the Sun Sentinel Patrick Peacock taught history and philosophy at the Art Institute of Fort Lauderdale, where he worked as an adjunct professor along with operating the Blue Zen Diver group.

Told Devrim Peacock who knew Patrick Peacock: ‘He loved nature and he wanted to protect it,’

‘He was not just an adventure seeker. He was a SCUBA instructor, an intellectual who loved reading and writing.’

The friend also told of Peacock also being an Air Force veteran.

Christopher Rittenmeyer was described by family members as a ‘a great athlete’, in addition to being an experienced diver.

Told the man’s father, Ron Rittenmeyer: ‘He has been diving since he was 12 years old, and cave diving for a long time,’

‘They dove that cave on Friday and everything was fine. He told me about the next day’s dive; he felt great.’

A graduate of the University of Kansas, Rittenmeyer specialized in digital technology for the Boston Consulting Group.

Added the father, ‘He was fun, creative,’

Diving expert Chuck Walls said the two men could have suffered from nitrogen narcosis – also known as Martini’s Law, a condition that can cause those struck by it to become confused while underwater.

Notes wikipedia: ‘Narcosis while diving (also known as nitrogen narcosis, inert gas narcosis, raptures of the deep,Martini effect), is a reversible alteration in consciousness that occurs while diving at depth. It is caused by the anesthetic effect of certain gases at high pressure.’

Reiterated the father via ABC News: ‘You have a lack of judgment and lose some of your inhibitions,’ he told ABC News.

‘Some people may even freeze up and do what we call “white out”.’

Conditions and symptoms that the veteran divers would have been very well aware of.

Notes the Aquaview magazine of the notorious location: ‘The Sinkhole’s challenging caves and and harsh conditions are not to be taken lightly.’

‘You get in there, and there is so much to see you get distracted, and it gets deep quickly,’ he said.

The two men are the ninth and tenth divers to die in the caves since 1981.

The last two to die in the cave were Daren Spivey, 35, and his 15-year-old son Dillon Sanchez, who drowned on Christmas Day in 2013.

A sheriff’s office investigation has found that pair died accidentally after apparently losing track of time and diving to 233 feet while using just air in their tanks.

The high number of deaths led to the system being closed off to divers in 1999, however the sinkhole was reopened in 2003, according to the Washington Post.

The National Association for Cave Divers and the National Speleological Society Cave Diving Section were two groups who pushed for it to be opened back up to those who wanted to explore it, the newspaper reports. Why the groups lobbied to have the dangerous water network opened is yet to be necessarily understood. 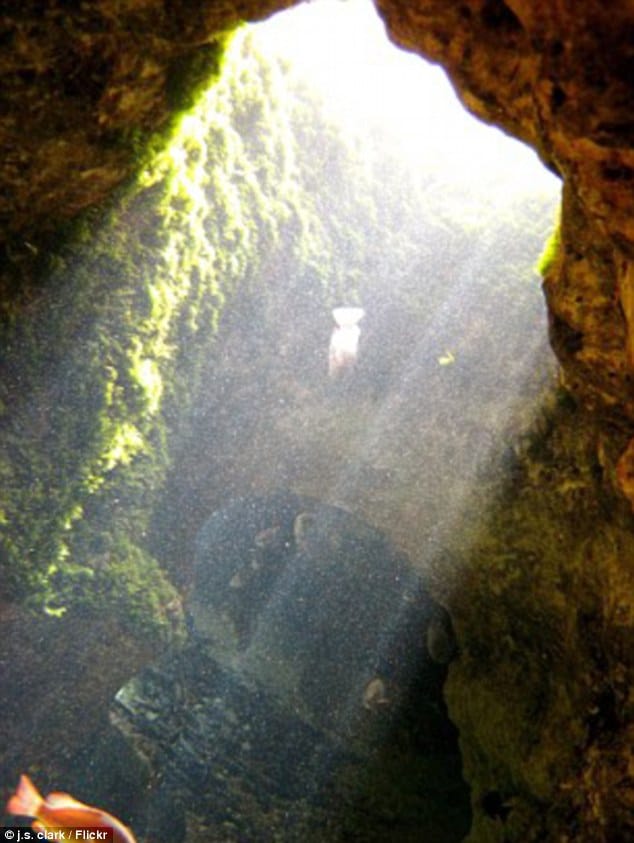