Linda Winters Johnson a Mississipi teacher has been fired after the Greenville High School teacher was caught on film dragging a special needs student by the hair across a gym floor.

The confrontation which occurred last month led to more than 6 million views on Facebook after a concerned parent Kesha Williams shared the shocking incident on social media.

In the video, the special needs student by the name of Taylor is seen held by the instructor as she lies on the floor, attempting to use the gym door handle to get up, before the special needs teacher inexplicably grab’s the student’s bun and drags her along for six seconds across the wood floor.

A second video shows Linda Winters Johnson pushing the girl in the head and slapping her wrist (very bottom of page).

What led to the confrontation has yet to be necessarily understood along with why the teacher retaliated with violence?

Needless to say, the videos elicited wild reactions, with many demanding the special needs teacher’s ouster.

Commented one user: ‘She doesn’t need to be teaching anywhere in the state!!!’

Adding: ‘Fire her and send her straight to jail!’

A report via WLBT cited the Greenville Public School District which announced last week that the teacher was no longer working at the school, with administrators voting to fire her on Monday.

Of note, Winters-Johnson to date has faced no criminal charges, though she may lose her special education license. Whether criminal charges will be filed is yet to be understood.

Leeson Taylor, the Greenville superintendent, has also been placed on administrative leave during an investigation into how the video was handled.

The decision to sanction both teachers comes 11 days after the video began circulating on the Internet. 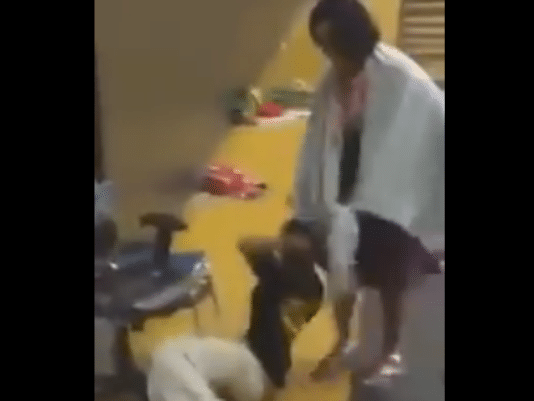 Of disconcert, a report via cbsnews tells of the videos coming off the back of the 5,300-student district struggling with poor academic performance. The superintendent before Taylor, Harvey Franklin , is serving a six-year federal prison term for taking bribes from a vendor.

Reacting to the fracas, Debra White, president of Save Our Children a community group speaking out against the public education system said that the Greenville Public School District had installed a system setting up the students to fail.

Told the woman: ‘I think they are on the right road to much needed restructuring. This is the beginning of a brighter future for our children in the Greenville Public School District. I feel like I have been vindicated or something. Justice has really been served.’