Ohio parents to a four year old, James Acord, 47, and Rhonda Pasek, 50, have been charged with child endangerment after they were discovered passed out the result of heroin binging while their 4 year old son sat moribund in the backseat of the couple’s car.

The arrest of the couple courtesy of City of East Liverpool police has since led to the police department sharing shocking images of the parents at the time of their arrest.

In choosing to share the ‘disturbing’ images with the public, the police department said it wanted to raise awareness of the heroin epidemic in Ohio. Police also told of wanting to deter people from  using drugs while having children in their care.

Read a caption accompanying the photos released on Facebook:

‘We are well aware that some may be offended by these images and for that we are truly sorry, but it is time that the non drug using public sees what we are now dealing with on a daily basis.’

‘The poison known as heroin has taken a strong grip on many communities not just ours, the difference is we are willing to fight this problem until it’s gone and if that means we offend a few people along the way we are prepared to deal with that.’

James Acord, Rhonda Pasek’s arrest came after an East Liverpool police officer was driving along St Clair Avenue at around 3.11pm Thursday when he spotted a dark Ford Explorer with West Virginia plates that was driving erratically.

When the officer approached the vehicle, he noticed that the driver, since identified as James Acord, appeared intoxicated, with his head bobbing back and forth and his speech almost unintelligible.

Acord told the officer that he was driving 50-year-old Rhonda Pasek to a hospital. The woman was slumped over in the front passenger seat.

According to police, Acord then made an attempt to drive away, but at that moment the officer reached into the car and pulled the keys out of the ignition.

That is when according to a report via the dailymail,  the officer noticed Pasek’s 4-year-old in the backseat. 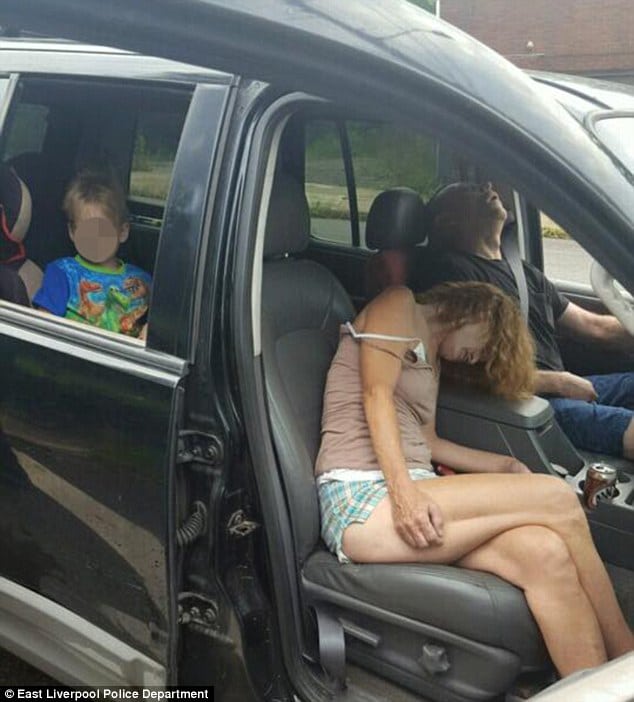 Paramedics summoned to the scene administered Narcan – a drug used to counteract the effects of a heroin overdose – to James Acord’s wife along with the husband, who by then had also passed out. The couple were then taken to East Liverpool City Hospital to be evaluated.

Acord was later charged with operating a vehicle while intoxicated, endangering children, and slowing or stopping in a road.

Pleading no contest, James Acord was sentenced to 180 days in jail for each of the first two charges, according to The Weirton Daily Times. The last count of impeding traffic was dropped.

Acord’s punishment also includes a three-year license suspension and a $475 fine, according to WTOV.

The man’s wife, Rhonda Pasek was charged with endangering children, public intoxication and not wearing a seatbelt. She pleaded not guilty and was ordered held on $150,000 bond pending her next court appearance scheduled for September 15.

Her young son has been placed in the custody of Columbiana County Children’s Services.

And then there was this factual account courtesy of the dailymail’s Pierce Morgan that made me wonder how Americans have come to be so overtly dependent on narcotics, legal or otherwise …

‘The statistics are mind-boggling: authorities said that nearly 300 heroin overdoses were reported in the Cincinnati area since August 19 alone, 174 of them in a six-day period.

That’s more than one an hour.

In Hamilton County, the number of accidental drug overdose deaths doubled to 414 last year from 204 in 2012.

This year so far there have been 92 overdoses reported a month, more than double the monthly average for the first six months of 2015.

These horrifying numbers are being replicated right across America, a country where 435,000 people now admit taking heroin every month and where heroin-related deaths have quadrupled this century.’