Two year old boy dragged alligator Walt Disney World: How did a toddler manage to be attacked and who bears culpability?

A father has told of his grief and horror after an alligator attacked his two year old son while playing along the Seven Seas Lagoon shore in World Disney World late Tuesday.

The incident comes after the toddler and his parents were holidaying from Nebraska when the boy’s father saw a seven foot alligator suddenly drag his son away with the un-named father then attempting to wrestle his toddler son from the gators’s mouth at man-made lake near Orlando just on 9.15pm.

As the father sought to pry the gator’s jaws, the mother also then in a last ditch effort jumped into the water, with both parents ultimately failing to rescue their son.

The parents told of observing the nearly seven foot reptile retreating back into the water with their son near Disney’s Grand Floridian Resort and Spa, located across from Magic Kingdom.

The father, who arrived in Florida Sunday with the boy’s mother and their three children, suffered some injuries to his hands during the attack. At the time, the family of five were relaxing on the shoreline when the alligator attacked the boy. 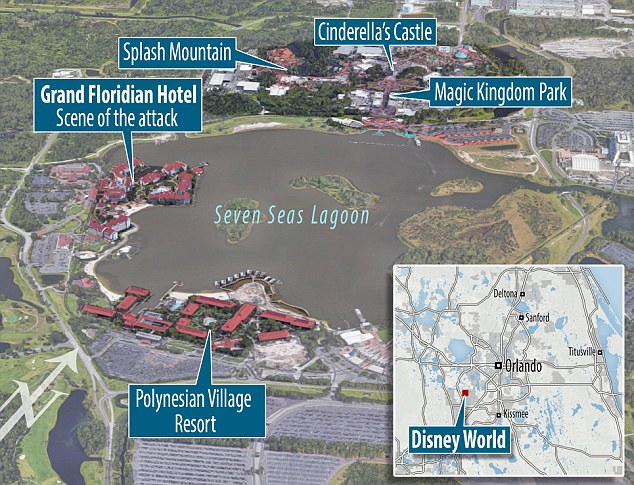 Told Orange County Sheriff Jerry Demings at a subsequent press briefing: ‘The parents diligently tried to get the child.’

Not necessarily understood is if the 2 year old boy survived the attack or whether authorities managed to trek the alligator. To date, authorities have told not finding the missing boy.

Reiterated Demings: ‘As a father, as a grandfather, we are going to hope for the best,’

‘These circumstances, based upon my 35 years of law enforcement experience, we know we have some challenges ahead.’

The gator attack was witnessed by several people including a lifeguard as resort guests watched a movie near the beach. A witness told there was a ‘movie night’ on the beach on Tuesday night, which is where the alligator may have attacked the toddler before dragging the child into the lagoon.

In the wake of the attack, a search for the alligator involved a helicopter roaming more than four hours above, while trapper boats on the water and search crews waded through the waters.

A report via the orlandosentinel told of a dive team with sonar equipment on standby — just part of a 50-person rescue team on the scene.

The 200-acre body of water is stocked with fish and is adjacent to Bay Lake, a natural lake also on Disney property.

An alligator in the water is not an unheard of sight in the lagoon.

Although wildlife officials had no alligator sightings on record for the past month according to a report via the nydailynews, a Facebook page dedicated to the neighboring Polynesian Resort featured multiple photos of at least one large reptile lurking in the lake.

Authorities plan to search the lake throughout the night hoping to find the child.

‘We’re not leaving until we recover the child,’ Deming added.

A Disney World official acknowledged the attack in a brief statement at the late night press conference.

‘Everyone here at the Walt Disney World resort is devastated by this tragic accident,’ she said.

The incident has since led to some commentators questioning why the Disney World theme venue elected not to barricade the area, knowing that the area is replete with alligators, in the same way as one commentator said, ‘a zoo takes the attention to cordon off wild animals from spectators who come to see them….’

What the hell is going on with Orlando..CNN is now reporting a two year old boy MAY been taken by an alligator at… https://t.co/uaQLUNDDY5

Now an alligator takes a two-year-old boy. At Disney? I’m done. I’m going to find a rock and just stay there… https://t.co/0QyAWphTkW

A two year old boy got dragged into a lake by an alligator by the hotel I was just at…. I’m sick to my stomach.