Brexit: What were the underlying circumstances that led to voters choosing to leave the EU and why the move to leave was inevitable.

Reading the commentary from the mainstream press as to why the UK chose to leave the EU and opt for Brexit has been a lopsided task of sorting through the claims of right wing extremism threatening to destabilize the UK and other parts of Europe (and here in the US too) along with the misguided English who just didn’t know better, deciding it would be fun to crash into a brick wall at 290 miles per hour.

Strangely, very little has been written of the cozy relationship between the Euro technocrats and the corporate/financial oligarchs that they dominantly represent and how those relationships served to entrench the interests of one class over the other, leading to the (eventual) disillusion of the common punter by now struggling for dear life.

Barely discussed is how that growing disconnect led to swaths of ordinary Britons (and many Europeans if one pays attention to the growing extreme right wing parties taking fold ) feeling marginalized, powerless, unheard and simply discarded.

Easy bait for isolationists and xenophobes who are apt to blame foreigners, migrants, refugees, transients for their country’s woes and ills, demanding their ouster, insisting they be relegated in their ability to draw from that nation’s ‘limited resources’.

While the idea of the EU in theory is a great one, free movement of goods and services, capital and people within member states, fostering the unification of a continental heartland for a common enlightened good and peace. The reality is over time, the realization of those goals came at the subjugation of any one nation’s sovereignty, with many member states fearful of being overruled by a non elected body in Brussels, and forced to accept policies had it being on its own would walk away from.

To no one’s surprise, Brexit led to the steep sell off in the British pound and general speculative assets as Britain’s exit from the EU has led to the undermining of investment dynamics, the free trade of goods and services that until this morning was par for the course and the expected diminished value of trade as Britain elected to lock itself out of a captive market which has consistently served as its primary economic vehicle.

If one is to understand what presupposed Brexit, perhaps a regard of what the EU was meant to achieve and where it ultimately failed may guide other member states now fearing their own Brexit style exodus. 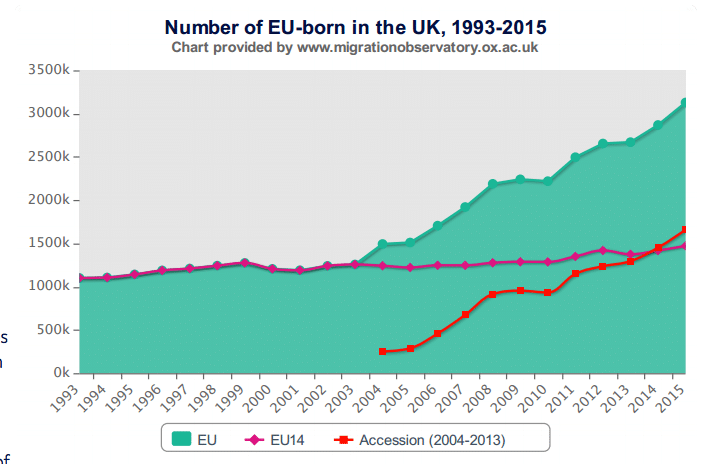 The grand idea behind the European Union used to be that all parties ought to share in the spoils of economic and social expansion, not just the few and chosen as has become the norm as one one neoliberal policy after the other was rubber stamped in Brussels. (Amazing how the economic advancement of the elite can be exploited in wider culture and press as that of the advancement of the wider collective).

For a while it used to work that way, but with the stinging reality of perennial economic austerity, contracting economies and the ever widening record gap between that of the one percent club and the rest of society, it wasn’t long before the straw blade that broke the camel’s back finally arrived (from the xenophobe’s perspective) in the visage of the displaced unemployed worker from southern Europe (post 2008-9 mortgage debacle), Syrian and Iraqi refugee 20015/16 (who could imagine bombing people to oblivion caused refugees) turning up war torn demanding/pleading their share of the ‘gravy train.’ Never mind the gravy train had long ceased to be an economic reality for most.

A state of affairs that right wing zealots and isolationist within the Tory conservative party exploited when they forced (the now outgoing) UK prime minister David Cameron‘s hand and implored him to take Brexit vote to the people, demanding that Britain at last put a stop to ‘rampant immigration’ (Between 1993 and 2014 the foreign-born population in the UK more than doubled from 3.8 million to around 8.3 million) along with the threats of extremists (aka Muslim immigrants) threatening liberty and cultural fluidity post 9/11.

The vote non coincidentally coincides with the rampant widening of wealth inequality between the elite and the common person at levels not seen since the Great Depression of the 1930’s.

Going into the Brexit vote, those with money to burn, voting hands over fist to stay in the EU and those with not much, voting in favor to leave. A state of affairs that is now beginning to take shape in the next anticipated break-away EU nation, whether Italy, Hungary, France, Greece or even Denmark and Sweden for that matter.

Nationalist parties across the EU want their own version of #Brexit vote https://t.co/Hwx1yNuQsX pic.twitter.com/mQbfBUWKql

Could other European countries follow in similar footsteps and vote for their own EU exit:? https://t.co/p274cUkJJg https://t.co/7OIV7ylQMd

While many would argue that the arrival of refugees and immigrants has little to do with the economic blight of the common person (it has more likely more to do with economic policy or lack of, austerity courtesy of Brussels and Germany, national debt to GDP (see Greece held hostage to the Euro) and the erosion of individual economic mobility), extremists, independent talking heads such as UKIP’s Neil Farage, Boris Johnson and here in the US, Donald Trump were quick to insist such economic despondency was the result of unabashed immigration.

Presuming immigrants are the ones that take the basest jobs that locals are often loathe to pick up ( I know my parents once did), one is pressed to legitimately argue for the long term that if it weren’t for immigrants ‘stealing‘ factory, cleaning jobs and other menial tasks that society would have full-employment. 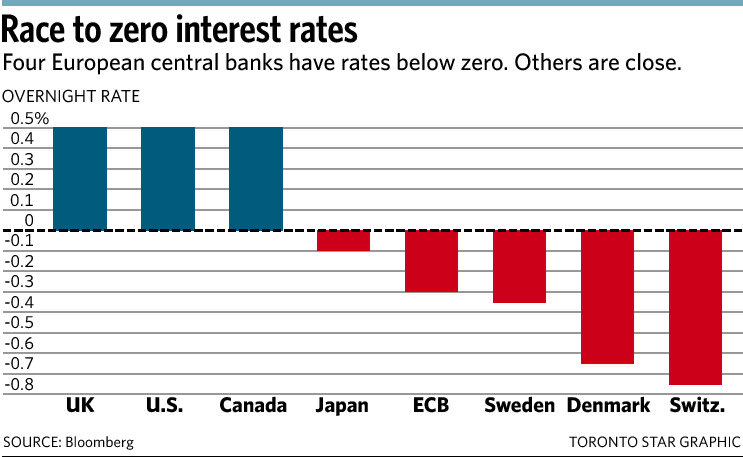 The reality of the matter is, economic policy has been doomed by the arrival of  negative interest rates, ( a phenomenon where it costs the saver to park money at their local bank) as a result of central banks shoring up previous financial disasters, bad bets, ugly debts that never leave balance books in the hope of reviving moribund economies and semi alive banking cartels.

Yet instead of using the money to actually create and fund real value, the bankers in turn simply used the ‘liquidity money’ to chase the few few scarce positive returns they could find within the financial markets.

All of which worked fine as the merry go round of buying into stock market, property market and bond rallies made sense for certain financial behemoths, fund managers while the rest of us looked on in disbelief and in fear of our pension retirements one day imploding while sipping on tomorrow morning’s coffee.

It doesn’t take an economics masters  degree to discern that somewhere in all of this a gambler never pays off his debts, a stock trader cares zero for a whittled elder’s pension and that left to itself the market would eventually implode as it one day dawned on somebody that not very much of real value was being created as one asset class bubble after the other became the norm.

Get up to speed with the latest on the #Brexit vote aftermath https://t.co/0WrMzsBFaT https://t.co/hY2Vi6gI2s

All of this to the nuanced observer has been running amok for some time now, with the ordinary taxpayer/sucker from time to time asked to fund the bill for another bad market bet, in the ‘heads I win and tails you lose’ financial bonanza that the technocrats both in Brussels, London and Washington abetted. Or simply forced to accept counter intuitive Brussels policies for the presupposed greater good of Europe even if meant one’s ongoing demise (but at least you can now take a cheaper holiday in Portugal, Spain, Italy or Greece).

On the flip, the left wing and the status quo faux centrist government apparatchiks have been busy attending to the ever pressing needs of the global capitalists and giving up hard fought rights of worker autonomy, regional trade so the stock trader/hedge fund manager and swathe of corporate insiders can eke out even higher bonuses as more workers are made redundant (or threatened) while financial asset gains continued to defy gravity.

At some point the ordinary downtrodden, exasperated, disillusioned, left behind person not part of the gilded club was bound to burst (whether in Europe or here in the US with the rise of Trump on the right and Bernie Sanders on the left). All of which pointed to the rise of anti establishment sensibilities both in Europe and here in the US, which augmented the very real possibility for a move beyond the normal status quo.

Wow. Belatedly watched @OwenJones84‘s pre-Brexit video and it’s like he has a crystal ball. Terrifying… https://t.co/qv3uNaPx5s

Where as the left sought demands that the corporate elite relinquish some of their loopholes (Glass Steagall act anyone?) along with with workers merited affordable minimum wages, isolationists and xenophobes on the right, called for a ban on Muslims and immigration, increased border controls, while currying to the inertia of the disillusioned persons pleading to be heard and salvaged.

While the ‘Vote for change‘ politician (that he never ended up being) Barack Obama and his presumed Democratic successor, Hillary Clinton (who has been bought and sold by Goldman Sachs $135 million times over) keep their mouths shut and continue turning on the spigots on behalf of their real constituency, a disillusioned US population watches meekly as the banking elite, and oligarchs are afforded more platforms to shore up their wealth, at the general expense of society as the neoliberal model of globalization merrily chugged along.

All matters that until now were business as usual for the the Euro technocrats who attended/abetted the pressing needs of the corporate hegemony, banking elite and their new ‘preferred‘ clientele. Concessions? Defend your living standards? Can afford to still pay rent? Guarantee you will one day get your pension? How about a fully loaded gun to your head?

Which raises the awkward question, what now? Will the UK with its new found freedom be able to foster the economic might and superiority it always believed it could if it just went on its own (albeit likely facing short to medium term upheaval) no longer clamped down by the technocrats of Europe and ‘all them immigrants’ ?

Or will the bitter reality sink in as bad as one’s left hand is, one sometimes even requires a crooked left hand to make themselves a couple of pieces of toast in the middle of the night to stave off a ravenous unquenchable hunger.

Time will tell how resourceful the Brits will be and how long other EU nation states similarly feeling duped, abused, discarded and left for dead seeking to also go their own way. But which way? A thought that ought to keep most current member states married to the bastard wife/husband, family collective they despise/mistrust for fear of ever finding self redemption on one’s owns terms.

My cartoon – #Brexit in a nutshell pic.twitter.com/l3YIFsX9Cz