What led to Kenneth Alan Amyx to posting images of his slain girlfriend on facebook? Terror as social media rebuffs family efforts to remove images.

Kenneth Alan Amyx a 45 year old Texas man has been arrested after allegedly posting two images of his slain 43 year old girlfriend, Jennifer Streit-Spears on Facebook after having murdered her.

The first image showed that of the dead girlfriend’s body while the second showed a man’s face, believed by cops to have been that of Amyx, covered in blood.

Read one of the captions Kenneth Alan Amyx posted, Sunday: ‘Please pray for us.’

The posting led to Sreit-Spears’ sister seeing the pictures who called police who forced their way into the couple’s apartment.

Inside, according to a report via CBS11, police fond the man’s murdered girlfriend, stabbed to death, with Kenneth Alan Amyx nearby with self inflicted knife wounds.

Amyx was arrested and taken to the Collins County Jail.

Told Fran Stamey a friend of the victim, who saw the images: ‘The pictures were not clear although they were extremely scary I just started to reach out to our mutual friends to see if they’ve heard anything,’

Yet perhaps most shockingly is the fact that it took Facebook nearly 36 hours to take down the photos despite numerous attempts at the family’s behest to remove the gruesome images.

Shockingly, a report via the nydailynews told of the social media outlet initially declining on account of ‘images not violating the site’s terms and conditions.’

Reiterated the social media outlet: ‘Facebook has long been a place where people share their experiences and raise awareness about important issues.’

‘Sometimes, those experiences and issues involve violence and graphic images of public interest or concern.’

Told the victim’s sister, who wished to remain anonymous via the dailydot: ‘I did ask them to remove it several times. They told me I could block Jennifer if I didn’t like what she posted and gave me other similar options.’

A spokesperson for Facebook defended their actions to CBS11, saying graphic photos are not a violation of Facebook’s policy, despite the images being flagged, they could not be removed until monitors determined Spears profile was hacked.

Amyx was previously convicted of ongoing sexual abuse of a minor in Rockwall County, as well indecent exposure in Dallas County, according to inmate records.

Ironically, up to the murder, the couple according to a neighbor had been living together quietly at the apartment. 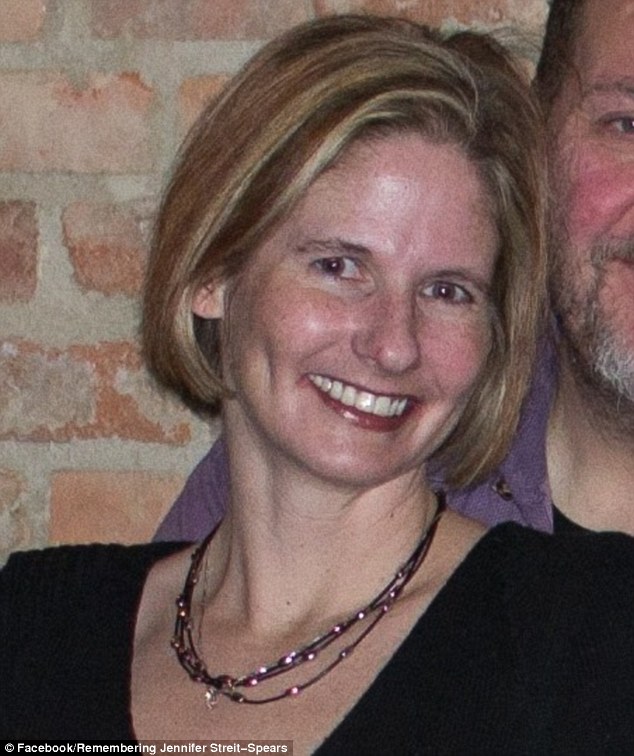