Nicholas Cage Vince Neil fight outside a Las Vegas hotel underscores the latest in bad behavior of the rock singer who has a sordid history and long arm with the law.

Entering this weeks tabloid sweepstakes is video of Hollywood actor Nicholas Cage fighting/scuffling/trying to make sense of buddy Motley Crue singer Vince Neil who caught the ire of the actor after allegedly pulling a woman to the ground by her hair inside the hotel after asking the rocker for his autograph.

The incident caught by tmz, showed the moment the 52 year old actor having taken exception with the 55 year old singer outside the Aria Resort and Casino approximately at 5pm, Thursday, moments after the singer allegedly went loco on a fan inside the venue.

Not clear is whether Nicholas Cage was pissed with Vince Neil or simply trying to ‘calm’ him down as later reports (Vince’s publicists’ working hard…) intimated.

What could have appeared to the outsider as a new movie scene, in an upcoming feature on two men in midlife crises trying to rekindle their youth and sense of purpose in life was anything but as the one well attired actor contended with the sloppily dressed Vince Neil who looked unsteady and confused. How or what led to the rocker’s lack of balance has yet to be necessarily understood (or has it?).

‘Stop this shit now,’ Cage was hears shouting into his beloved fxcked off his head’s ear as the world’s cameras trained on the ensuing made for tabloid headline scene.

Cage then grabbed Vince and tried to put him in a lock to physically restrain him. Nicolas then soothed the headbanger, saying, ‘You’re OK, I love you.’

Yes kids, this is your cue to swoon as the mickey mouse sticker comes flashing across your tv screen reminding you this segment of the program is ‘brought to you by MakeBelieve’. 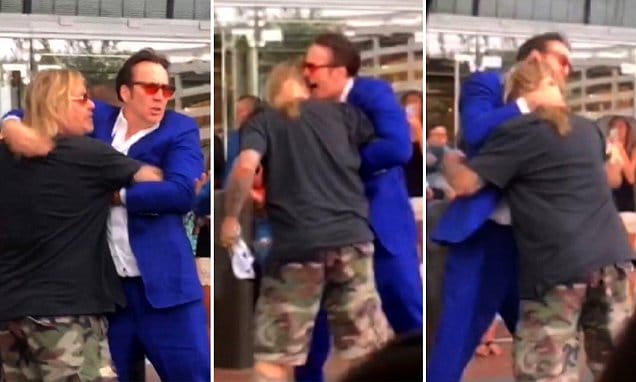 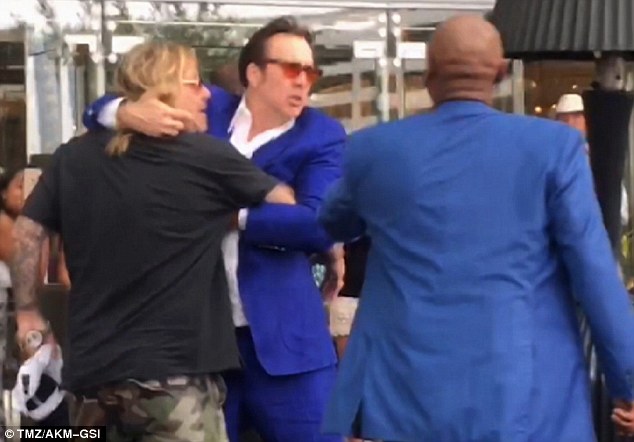 Further reports told of bystanders standing around taking photos of the delicious mayhem nd a man who appeared to be a security officer attempted to diffuse the situation, who Cage was heard excusing ‘No worries, he’s my buddy.’ as he bear hugged/wrestled a visibly irritated Vince Neil.

According to TMZ, Vince allegedly attacked a woman in the upscale hotel and the singer is ‘now the subject of a criminal investigation.’

Law enforcement sources told the site ‘the fight went down at around 5 PM at Aria Hotel on the Vegas strip.’

It was added that the movie star and the rock icon were together inside Aria ‘when a woman came up to Nic and asked for an autograph.’

Though police are not seen in the video, the site claimed that Vince was ‘cited for battery and never taken to the station.’ 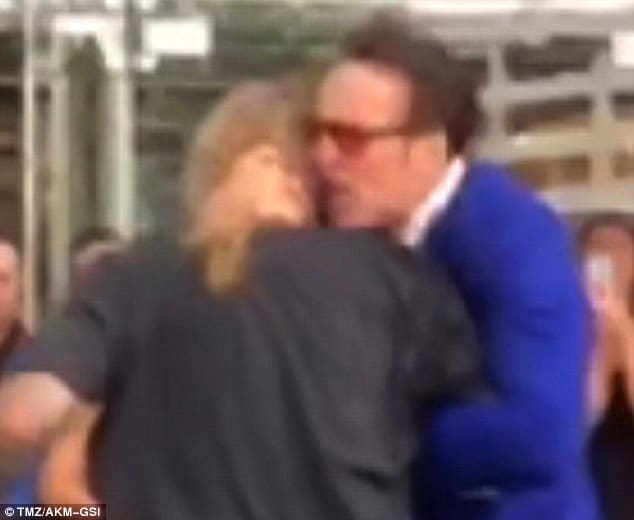 The latest fiasco come off Vince Neil having a long history with the law.

A report via the dailymail notes the rocker getting into an accident in 1984, killing passenger Nicholas ‘Razzle’ Dingley, a drummer with Hanoi Rocks. He also hurt two occupants of another car – one suffered brain damage.

Neil was charged with vehicular manslaughter and driving under the influence of alcohol in connection with the crash. His blood alcohol level was 0.17.

In 1986, Neil was sentenced to 30 days in jail by the Los Angeles County Superior Court. He was also handed a $2.6 million in restitution to the victims of the crash and 200 hours of community service.