Savannah Rae Finn missing: How a call to raise funds for a presumed missing Florida woman led to upheaval and allegations on a gofundme page.

After disunity on a GoFundMe page for missing 22 year old Florida woman, Savannah Rae Finn (also known as Savannah Rey Finn) in which allegations of misappropriation of funds were made, the platform has moments go just written to our outlet telling us that all funds donated have been refunded.

Calls for a refund come after news of the 22 year old going missing over the weekend after a getaway trip with her boyfriend to the U.S. Virgin Island, St Thomas led to an incident in which the couple were swept off the rocks by waves on Friday.

Whilst the boyfriend managed to get back on the rocks, local reports told of Finn last being seen with her head down in the water before being swept away.

In an email from gofundme media director, Kelsey Little, just on 2pm EST, our outlet was advised that organizers from the page, ‘Bring Savannah Home’ have refunded all funds donated and that they would no longer be accepting donations.

Tells a message on the board via organizers: ‘Due to some of the families requests we are shutting down the fund, Our deepest wish to help the family and not cause any additional turmoil.’

The decision to return funds  comes after acrimony in the comments section after questions were raised as to why organizers, believed to be friends (but not necessarily substantiated) had elected a suggested target of $25 000 in order to retrieve the missing body of the presumed dead Florida International University student, believed to have drowned after being swept off rocks at U.S Virgin Islands venue, St Thomas’ Peterborg Point.

Read the originating plea for donations: ‘We desperately need to get her home, which is a very costly endeaver. The money raised on this page will go towards bringing Savannah home to her family and friends. Please please help us.’

After commentators raised questions as to why $25 000 was indeed needed and whether organizers were taking advantage of Savannah Finn’s death, Savannah’s stepmother Jackie Porter went on the comment board to urge donors to stop donating money and told those who had donated to demand a refund as they already had the costs covered.

Wrote Porter: ‘This is Savannah’s stepmother of 10 year’s and Father. The entire immediate family including Savannah’s mother and two brothers are in St Thomas and do not need money to get family hotel. Airfare NOR get her home if the body is found. STOP donating money. Demand a refund if yiu do not get refunded within 24 hours report JENNA to Ft Lauderdale fraud department.’

In another post she said Finn’s family ‘only needs your prayers’ and urged people to donate to the unit on St. Thomas taking part in the rescue.

Jenna Baggio, who set up the group, revealed that she would take the page down following the ‘family requests’.

It is not clear what connection she has to Finn, but according to Facebook they go to the same university.

But just over an hour later, it reappeared, but the total had gone back to $0. 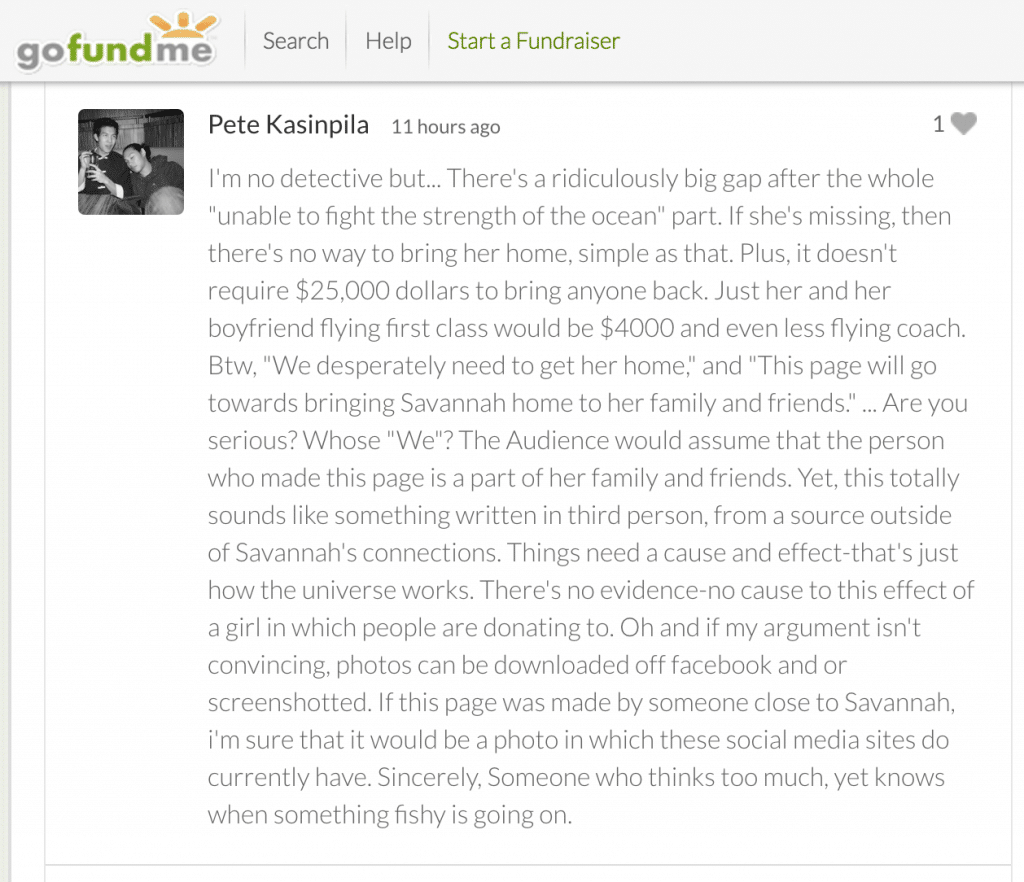 The feud comes after commentator Pete Kasinpila Sunday evening wrote: ‘I’m no detective but… There’s a ridiculously big gap after the whole “unable to fight the strength of the ocean” part. If she’s missing, then there’s no way to bring her home, simple as that. Plus, it doesn’t require $25,000 dollars to bring anyone back. Just her and her boyfriend flying first class would be $4000 and even less flying coach.

‘Yet, this totally sounds like something written in third person, from a source outside of Savannah’s connections. Things need a cause and effect-that’s just how the universe works. There’s no evidence-no cause to this effect of a girl in which people are donating to.

‘Oh and if my argument isn’t convincing, photos can be downloaded off facebook and or screenshotted. If this page was made by someone close to Savannah, i’m sure that it would be a photo in which these social media sites do currently have.

‘Sincerely, Someone who thinks too much, yet knows when something fishy is going on.’

In turn an alleged friend of the missing woman, Patricia Smith wrote: ‘This was a plea from Savannah’s Freind to help bring her home, Not that Her parents couldn’t afford to..jst a Way for Freinds to help .. She Had Many Frinds that jst want to help.. I Woukd Think Mrs Porter could be more Thankful.. Il jst leave it there.. Those who know Savannah know she would be very grateful by the show of support from her Freinds.. RIP Sweet Girl.’

Irrespective of the feud and allegations and with organizers reaffirming funds have since been returned, investigators to date have not told of discovering the missing woman’s body after going missing on Friday. Savannah Rae Finn is now believed to have drowned as friends and family begin to take stock of the much beloved aspiring lawyer’s untimely death.